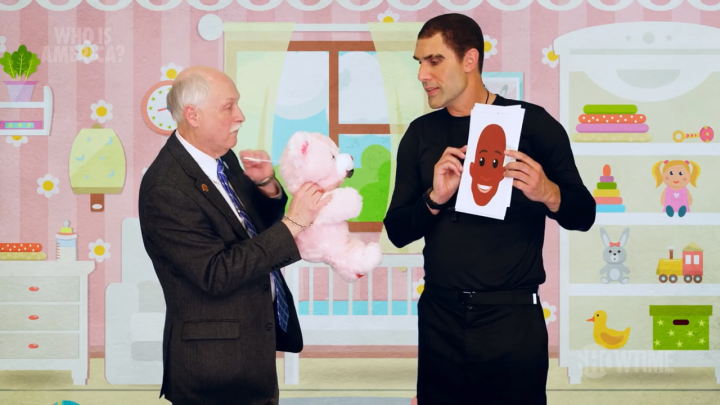 Over the past few weeks, we’ve heard complaints from several current and former conservative politicians that were duped by Sacha Baron Cohen. Apparently, the actor best known as Borat had been secretly working on a new series for Showtime as a new character, and after receiving weeks of free publicity thanks to the politicians who he fooled into participating in interviews, Who Is America? finally debuted on Showtime over the weekend.

The first episode focuses on, among other topics, gun control. Much like in HBO’s Da Ali G Show, Cohen becomes a series of characters designed to bring out the best (or the worst) in his unsuspecting guests. One of those characters is an Israeli anti-terror expert named Colonel Erran Morad who believes toddlers should have guns.

In the clip below, you can see what happens when Morad sits down with gun advocates and Republicans members of Congress to explain that children in Israel are trained to use guns at as young as four years old. As you can probably guess, Morad’s guests are all for this practice and help him film a ridiculous PSA:

“WHO IS AMERICA? is a satirical half-hour series from comedian Sacha Baron Cohen,” Showtime explains on its website. “The series explores the diverse individuals, from the infamous to the unknown across the political and cultural spectrum, who populate our unique nation.”

You can watch the entire first episode on ShowtimeAnytime.com if you have a cable subscription with Showtime in the package. If you don’t have cable, you can also sign up for Showtime a la carte and take advantage of the 30-day free trial. The series will be seven episodes long, stretching into the end of August.