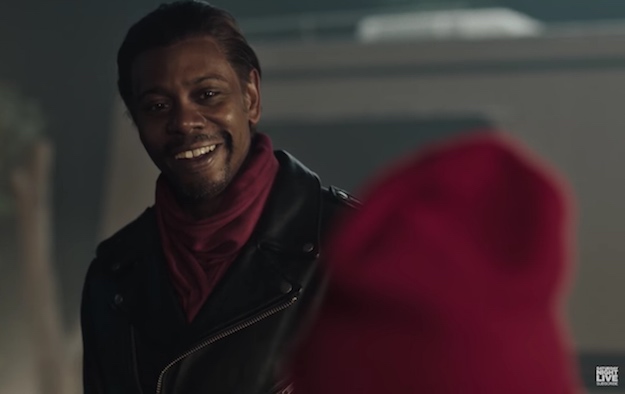 In the early to mid 2000s, Dave Chappelle and his writing partner Neal Brennan helped take comedy to new heights with Chappelle’s Show, an irreverent and cutting edge sketch comedy show that ran on Comedy Central from 2003 to 2006. With Chappelle taking up hosting duties on Saturday Night Live this past weekend, the famed comedian used the opportunity to resurrect some of his most well-known characters in a rather clever The Walking Dead meets Chappelle’s Show hybrid parody.

Mirroring the major plot line from the season 7 Walking Dead premiere, Chappelle brandished a barbed wire baseball bat and pulled off an impressively solid impersonation of Negan. Meanwhile, instead of threatening characters like Glenn, Rick and Abraham, Chappelle — in full Negan regalia — proceeded to threaten a number of memorable characters from Chappelle’s Show lore, including Clayton Bigsby, Tyrone Biggums and Lil Jon.

For any fans of Chappelle’s classic sketch show, the Walking Dead spoof below made for a nice trip down memory lane, especially given that Chappelle has largely been outside of the spotlight since leaving his sketch comedy show about 10 years ago. While Chappelle still performs standup here and there, this is the first time we’ve seen the famed comedian dust off his acting chops for sketch comedy in quite some time.

All in all, Chappelle has received rave reviews for his job as an SNL host this past weekend. In the process, Chappelle and the show’s musical guest — A Tribe Called Quest — attracted more viewers than SNL has seen since 2013.