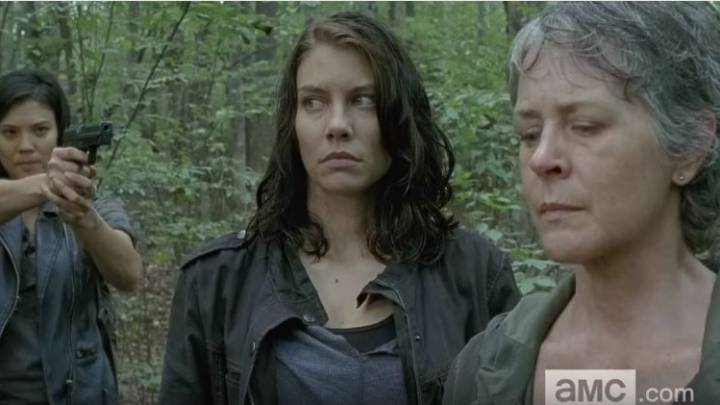 Last week’s cliffhanger left me more anxious than ever to see last night’s episode of The Walking Dead. In case you don’t recall, in the previous episode Carol and Maggie wound up getting captured by a group of Negan’s Saviors and I had to wait a full week to find out their fate.

Beware, though; spoilers will follow, so if you haven’t seen episode 13 (The Same Boat) yet, this is your chance to stay away.

I was honestly very surprised that Carol got captured since she’s proven to be a woman who will do absolutely anything to ensure her family’s survival. But it turns out Carol flinched when being pursued by one of the Saviors. Overcome with anxiety and guilt, she didn’t shoot to kill when she had the chance and instead only tried to wound one of her attackers.

This is when we see Carol further doubt her role in the grand scheme of things. She seems to be unwilling to kill other people and she hesitates more than once. She panics and she recovers.

And this time, Carol genuinely freaks out. She can still react, she can fight, and she wants to escape. But she’d like to do it without having to kill others. At the same time, Carol’s not weak. Her killer reflexes are still there, and she does manage to overcome anxiety when it matters. But that fear and remorse persist. And I’m not sure that I want to see Carol becoming more like Morgan.

Maggie, meanwhile, is perplexed by Carol’s inexplicable hesitation and seems to take on more of Carol’s traditional role. Her maternal instincts are kicking in. It’s absolutely obvious to her that being captive isn’t going to work in her favor and she is ready to take out the Saviors in any way possible to secure their escape.

The Saviors aren’t just cartoon bad guys, however. They’re led by a young woman named Polly who has lost her husband and four kids and is now just trying to survive. She’s really ready to kill Carol and Maggie in retaliation for Rick’s daring attack last week, but she hangs onto them to have a bargaining chip with the Alexandria folks.

Rick and his crew come to their rescue after picking up Carol and Maggie’s trail. But by the time they get there, the entire facility where the two women were held captive has been cleared after Carol and Maggie disposed of both their captors and nearby zombies.

Rick, meanwhile, has a hostage of his own, which he planned to exchange for Maggie and Carol. But without any further need for the hostage after Maggie and Carol’s rescue, Rick’s puts a bullet through his head.

What’s clear from this episode is that Carol isn’t her normal self after this particular experience, and I’m definitely curious to see what’s in store for her next week.