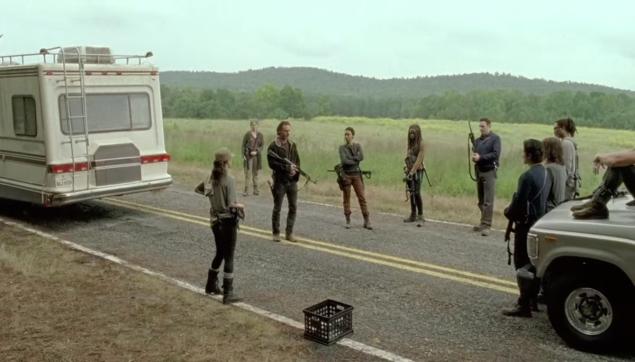 The Walking Dead’s episode 12 is probably one of the best of the series so far. Just like previous parts in season 6, Not Tomorrow Yet has us on the edge of our seats. Yes, there are walkers that are a constant threat in The Walking Dead, but they can’t match the evil that resides in the human soul.

Before we flood you with spoilers, now’s the time to walk away from this post and watch the new episode yourself.

There are three major factions in this particular setting of the Walking Dead universe: The “good guys” (Alexandria group), the bad guys (Negan’s Saviors), and the shade-of-gray guys (Hilltop community).

As leaders of the Alexandria group, Rick and Maggie negotiated a horrific deal with the Hilltop people. They agreed to kill Negan’s Saviors in exchange for 50% of all food production inside Hilltop. It seems that Alexandria, while well defended against a zombie assault, does not have any food left and isn’t growing any crops of its own. Meanwhile, Hilltop can’t defend itself against the cruelty of Negan’s men, some of whom we saw in the mid-season premiere a few weeks ago.

Rick then asks – and persuades – the Alexandria crew to go on a dangerous night raid against a group of warriors lead by Negan. Many people disagree with the scheme and Morgan in particular takes issue with having to kill so many people.Regardless, many end up supporting Rick’s decision. They’re all accomplices to a crime, even though you can easily rationalize everything and argue that it’s going to be either Alexandria and Hilltop or Negan.

Yet you can feel the pain of the characters of having to kill other people in their sleep. Glenn has never killed someone in cold blood and you can feel his horror as soon as he starts crying after his first murder. It’s one thing to fight other humans in combat, and quite another to just kill people who can’t defend themselves.

The mission is almost a wild success. The night ambush works and several Saviors are killed, though Negan is nowhere in sight.

However, the rather rushed plan is far from perfect, as Maggie and Carol are both kidnapped – and that’s the cliffhanger of the episode.

The teaser for next week’s episode, which will hopefully provide answers to our burning questions, follows below.