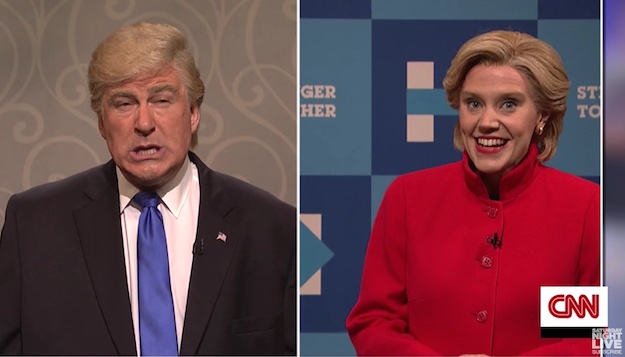 Just days ahead of the 2016 U.S. Presidential election, Saturday Night Live brought out its big guns yet again in another memorable sketch which not only poked fun at Donald Trump and Hillary Clinton, but also satirized the role of the media in the political process.

With Kate McKinnon pulling off a solid Hillary Clinton impersonation and Alec Baldwin once again delivering a home run with his spot-on take on Donald Trump, SNL’s cold open this week was once again must-see TV.

Interestingly, the sketch veered off into an unforeseen direction about three-quarters of the way through.

Trump of course fired back, unleashing yet another verbal tirade before pulling an abrupt 180.

“You know what I think would help up us?” McKinnon asked rhetorically, “let’s get out of here.”