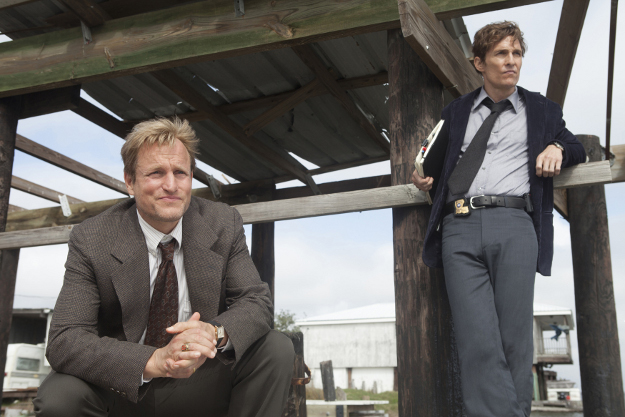 The first season of season of HBO’s True Detective was some of the most riveting and compelling television to have aired over the past few years. Featuring an intriguing storyline set in the backwoods of Louisiana, Matthew McConaughey and Woody Harrelson delivered A+ performances as they brought Nic Pizzolatto’s eery and incredibly unique script to life.

Unfortunately, season 2 of True Detective was nothing short of a disaster. It wasn’t just that it failed to live up to the first season, it was that the second season was so boring, uninteresting and muddled that it was hard to believe it was even penned by the screenwriter.

While it remains to be seen if there will be a third season of the acclaimed show, McConaughey recently explained that he’d be extremely interested if not downright eager  his role as Rust Cohle.

During an appearance on The Rich Eisen Show, McConaughey explained that he was immediately taken by Cohel’s character and that “Cohle really speaks to me.”

When asked about a third season, McConaughey couldn’t contain his excitement.

“I hear that all the time now,” said McConaughey. “‘You said you were going to do season 3. When is it coming?’” He went on to add that the “ball’s not advanced at all. I’ve talked to the creator Nic Pizzolatto who’s taking a little break from it.”

Not all hope is lost, though. “If that thing was written well and it came up again, I wouldn’t hesitate for a second,” he admitted. “Oh, I’m open to it for sure.”

Hopefully HBO and Pizzolatto can reach an agreement and get the ball rolling on season 3, if only to erase the sour taste left behind by season 2.

Now as to why True Detective’s follow-up season was such a grave disappointment, HBO President Michael Lombardo admitted that he put too much pressure on Pizzolatto to deliver a script on an arbitrary timetable rather than letting his creative juices flow organically.

“And I think in this particular case,” Lombardo said, “the first season of ‘True Detective’ was something that Nic Pizzolatto had been thinking about, gestating, for a long period of time. He’s a soulful writer. I think what we did was go, ‘Great.’ And I take the blame. I became too much of a network executive at that point. We had huge success. ‘Gee, I’d love to repeat that next year.’”

“Well, you know what? I set him up,” Lombardo added. “To deliver, in a very short time frame, something that became very challenging to deliver. That’s not what that show is. He had to reinvent the wheel, so to speak. Find his muse. And so I think that’s what I learned from it. Don’t do that anymore.”