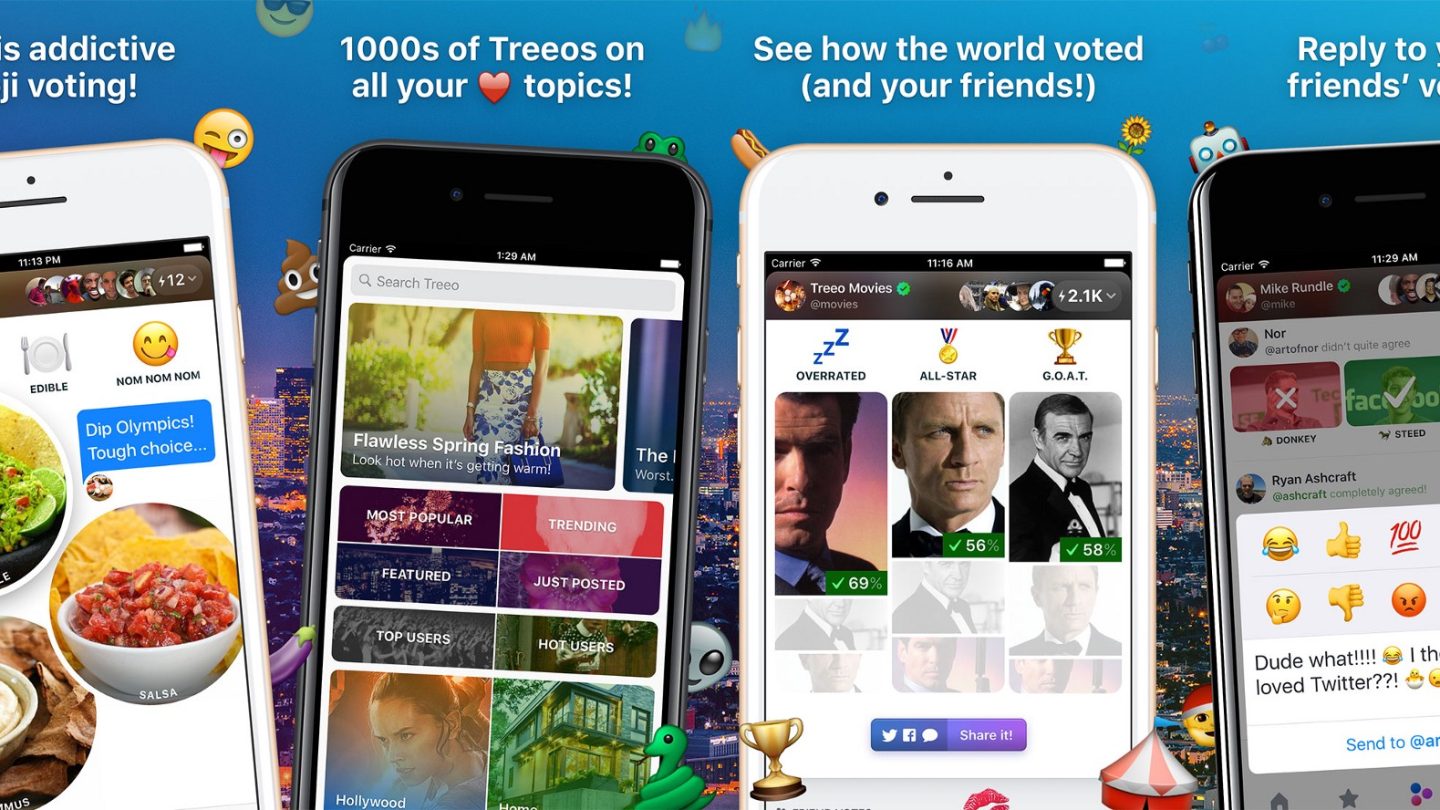 There’s something about polls that are endlessly fascinating to humans. It doesn’t make much sense, but we as a species really, really like to record our feelings, opinions, and stances in every possible way, even if it’s something that really doesn’t have any actual meaning whatsoever. Treeo, a new app that bills itself as “addictive emoji voting” squeezes that little part of our brains until it practically bursts, and there’s a good chance you could lose some serious time

As the name implies, the core mechanic of Treeo is a three-option polling system that forces you to decide how you feel about the specific options. It could be as simple as choosing which of three really awesome looking vacation destinations fits your taste the best, or deciding how you feel about three different outfits. But rather than just pick your favorite, you have to choose between the three emoji options — typically ranging from great, which might be a thumbs-up emoji, to awful, like a poop emoji, along with a third option somewhere in between. You drag the circular image of the choices to the emoji that matches, according to you, and your vote is then logged. Immediately after you vote, you get to see a breakdown of exactly how everyone else voted, with percentages showing how close you were to the average or how completely absurd your opinion actually is. It’s extremely easy to grasp, and there’s really no barrier to entry or learning curve, you just open the app, vote, and view results. But the real fun of Treeo is less about your own voting habits and more about seeing how your friends have voted. On the post-voting results screen you can scroll down to see how other people you’ve connected with on the app also voted, which really makes the whole exercise feel very, very personal. Finding out which guy (or gal) celebrity your friends find the most attractive, their favorite obscure 80s band, or what their dream car is can be a pretty enlightening experience, and the option to comment on friends’ votes makes it a much more social experience than you’d initially expect. Of course, if you really want to embrace Treeo’s most addictive feature, you can create your own polls, where you pick a category, choose the options, and assign the emojis you want the voters to use. It’s very simple and you can whip up a poll in a matter of seconds. It’s one of the app’s best features, but it’s also where there could be potential for abuse — think “hot or not” mixed with a hefty helping of adolescent bullying, for example. It’s not a deal-breaker, but it’s something Treeo’s creators would do well to monitor to ensure things don’t go off the rails. You can read more about Treeo in the company’s Medium post, and download the app below.

Treeo is free to download, and is live right now on the App Store.