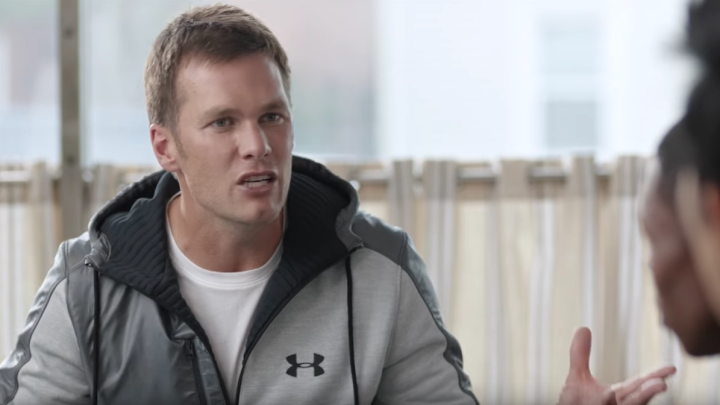 Despite a highly publicized trial and subsequent suspension for his alleged role in Deflategate, Tom Brady has remained exceptionally quiet about the whole ordeal since his return to the field. That all ends today, thanks to a hilarious Foot Locker ad where he holds very little back.

The commercial, celebrating Foot Locker’s “Week of Greatness” sneaker event, features the quarterback and a pair of Foot Locker customers in a diner. Soon, Brady finds himself defending how Foot Locker can make its annual sales event so great so consistently.

“Just because something’s great year after year doesn’t mean something’s going on,” he challenges. “Why can’t some things just be great?”

That’s when things get a little bit more intense: “It starts with ‘questions,’ then questions turn to assumptions and assumptions turn into vacations. So why would you punish the Week of Greatness for something that never even happened??”

Brady wraps up his rant by storming out of the diner while saying “I’ve lost my appetite.”

Regardless of which side of the debate you fall on — whether you think Brady is a dirty cheater or feel he was unfairly targeted by NFL commissioner Roger Goodell — it’s undeniably funny to see Brady throw so much shade in such an unsubtle way.

Brady served his four-game suspension earlier this season, sitting out until week five. Without Brady at the helm, the Patriots managed to piece together a 4 and 1 start. After his return, the team cruised to four more consecutive wins before being toppled by the Seattle Seahawks in week 10.