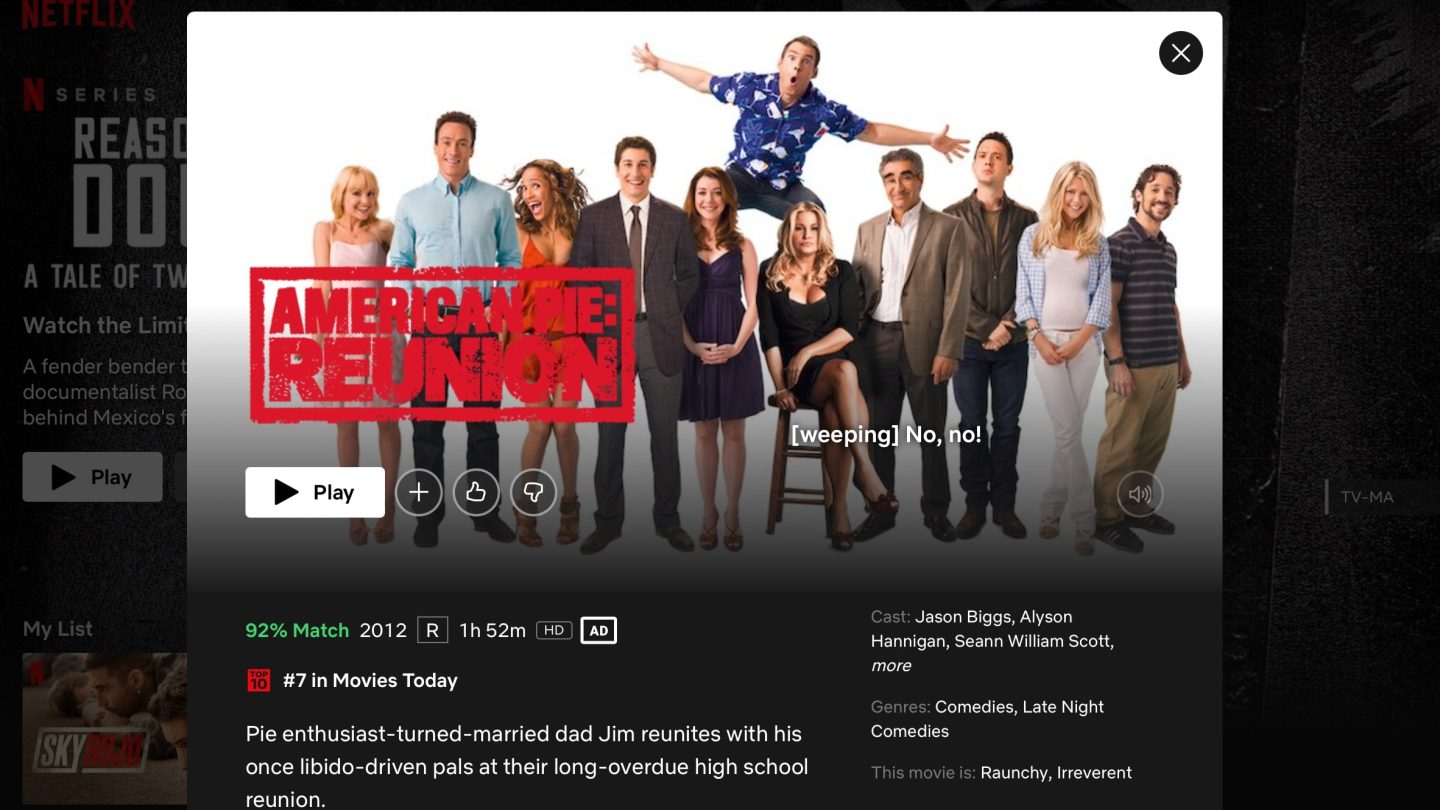 While perusing the current list of Netflix’s Top 10 movies for the US market, a thought occurred to me. Actually, a question. Does someone need to show you all how to correctly operate your Netflix app? Otherwise, I’m not sure there’s a coherent rationale for how 2012’s American Pie: Reunion ends up being the #7 movie on Netflix as of the time of this writing.

And before you try and offer a defense or logical argument for how this happens, just stop. This is a trash franchise. Stupid plot, dumb writing, juvenile gags. The current iteration of Netflix’s Top 10 movies list has this title just behind, at #6, let’s see …. oh, okay. The Harder They Fall is one slot above. Just barely better than American Pie: Reunion. Okay, yeah. Makes perfect sense.

The plot, if such a thing can even be said to exist in this latest installment of the franchise, is as follows. Per Netflix: “Pie enthusiast-turned-married dad Jim reunites with his once libido-driven pals at their long-overdue high school reunion.”

Over at Rotten Tomatoes, the critics’ consensus rating is that this title “fails to do anything truly new or interesting — or even very funny — with the characters.” Accordingly, it’s got a 45% critics rating, based on 185 reviews. Like this one from NME, which reads in part: “Insert your own ‘stale pie’ metaphor here, but we’ll opt for ‘it’s not edible.'”

Meanwhile, the movie earned itself a 63% audience score on Rotten Tomatoes. Based on — checks notes — more than 250,000 user ratings. Fast forward almost a decade on from its release, and here we are. Or, rather, here it is. Burning up the Netflix charts.

Pleased to see American Pie: Reunion is on @netflix 💜

As we said, this movie is currently the #7 feature film title on Netflix in the US. The full Top 10 list is as follows:

Meanwhile, you can check out our previous coverage below for a couple of the names on that list. Specifically, two pretty high-profile Netflix originals:

Red Notice had the biggest opening day of any Netflix movie ever. As we noted in that piece, Netflix certainly went on an advertising blitz to ensure that the movie would be a hit, and it seems to have paid off. The only thing really standing in the way of Red Notice is the tough response from critics. The movie is currently sitting at 35% on Rotten Tomatoes with over 120 critic reviews. But talk about lopsided; viewers, on the other hand, absolutely love it. They’ve given it a pretty stellar 92% Rotten Tomatoes score.

The epic Netflix original action movie everyone’s been waiting for is finally streaming (The Harder They Fall). A review from USA Today calls this one a “stylish Western shoot-’em-up to remember.” And it certainly was one of the most eagerly awaited Netflix releases in October. Also, here’s a fun fact. In this movie, Delroy Lindo plays a Black US Marshal by the name of Bass Reeves. You’ve probably never heard that name before. But you have almost assuredly heard the name of the pop culture figure based on Reeves: The Lone Ranger.