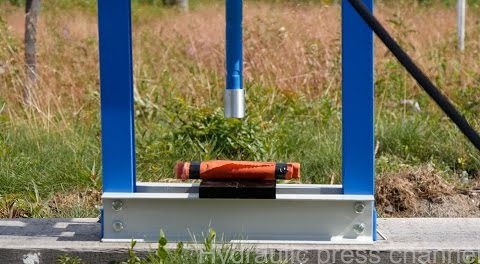 Unlikely internet celebrity Lauri Vuohensilta is the Finnish genius behind Hydraulic Press Channel, a YouTube channel that does…well, you can probably guess.

This video is exactly what it says on the tin: Vuohensilta gets a cheap hydraulic press he won’t mind destroying, a few sticks of dynamite, and sets the cameras rolling. There is some tiny amount of science being done, among the destruction: dynamite is a stable explosive that generally needs a detonator to set it off, so will simply crushing it set it off?

Well, spoiler alert: no it won’t. The crushers tried twice, and in both cases, the dynamite simply got flattened rather than exploded. But there is a big boom in the end, as det cord is used to make the flattened dynamite safe.

Of course, there’s a problem with this “test”: the dynamite only had to face a puny, disposable hydraulic press. The much heavier, stronger hydraulic press that is used for most of the videos is what we really need to see.