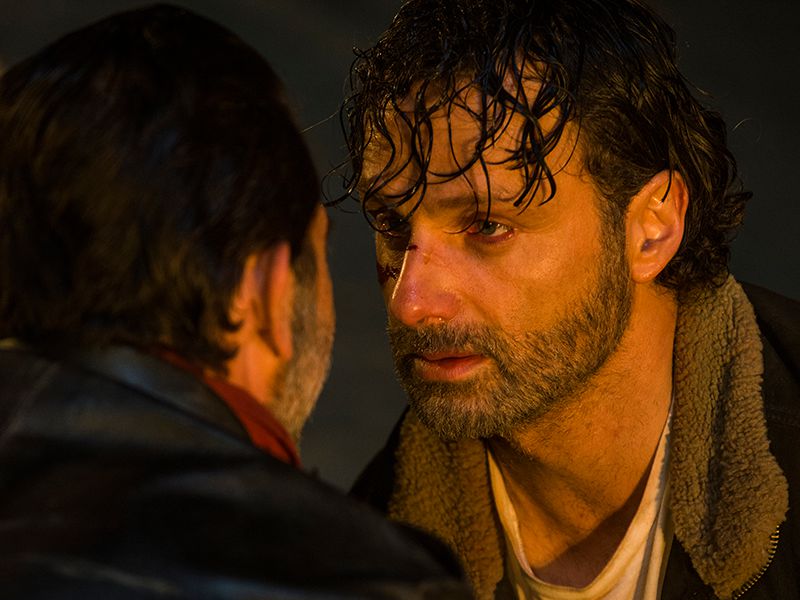 The Walking Dead season 7 is finally over! Well, the first half of the season is done, and we needed a break considering how slow this season has been so far. AMC aired a tumultuous episode 8, which was probably one of the best episodes of the season so far — perhaps the second best after that chilling premiere. But all the bad episodes in between episode 1 and episode 8 wore me down to the point where I wasn’t really excited about last night’s mid-season finale at all. Before I get into what happened in this latest episode though, please make note of the obvious and obligatory spoiler alert.

Last night’s episode was great. FINALLY. We had plenty of action, including walker fights, and we saw almost all of the show’s most important characters in it. It did end with a few bangs, though things could have been a lot more entertaining.

Let’s start with Rick. He finally sees the light. He has to fight. He has to bring everyone together. But it’s laughable to see that what finally convinced Rick is the fact that two more people died. Spencer, who had it coming for a few episodes now, and Judith’s babysitter, who’s so insignificant in the grand scheme of The Walking Dead that she had to go.

So after Glenn and Abraham died, Rick was willing to work for Negan and the Saviors. But now he’s ready to fight? Sure, the fact that Negan did what he did in a time span of a few days, including showing up at his house, raises plenty of flags. It’s clear that you can’t really win with the Saviors. But Rick’s entire let’s-play-nice routine doesn’t work. Even if you have to pretend in front of Negan, it’s really not something you can do in this universe.

As for Negan, last night’s show proves that he’s a great villain. And a great leader too, which is something I pointed out weeks ago. He’s an excellent judge of character, and he’s keenly aware he can’t kill just about anybody.

Negan spared Rick and Carl, seeing their potential. But he’s not eager to have a would-be traitor like Spencer among his ranks. He also recognized immediately that Rosita doesn’t have the skills to make bullets. Just as easily, he can tell that Eugene is indeed the type of person who would rather know how to make bullets than fight. I’m betting Eugene will be put to good use in the future. Making bullets. Hey, at least Negan didn’t take Judith, which would have been a pretty ballsy move.

We also got to see Negan scared for the first time. Rosita had a chance, and she took it. Negan only survived thanks to sheer luck, but he realized he could have died. He also keeps Rosita alive because people like her are still valuable to him. That’s why he probably doesn’t go on the killing spree you’d expect him to.

Rosita doesn’t need more praise. She’s a bad ass and she knows it. But her actions, combined with Michonne, Maggie, Spencer and Carl only prove — yet again — that there’s something seriously wrong with Rick.

Rick isn’t able to really lead if he’s not uniting people and helping them work together. The Alexandria group behaves erratically after Glenn and Abraham die because of Rick. Partly because of his decision to work with Negan, which they don’t agree with, and partly because these people do not really communicate with each other effectively. After all this time. Every character in Alexandria close to Rick wanted to kill Negan, but Rick let every opportunity slip away.

Daryl makes a daring escape in episode 8, but we’re not treated to it yet. That’s the kind of action that would deserve more than a few scenes. And he doesn’t really get to talk that much. He needs lines, and he needs to cut his damned hair. Carl, too.

Carol is in a bad place right now, and everyone is looking to motivate her to be the bad ass leader we loved in previous seasons. It’s a complex arc for her, one that doesn’t make her very likable in season 7. That’s probably why we don’t get to see her much.

Aaron should have died in that lake. We’d miss him, but when’s the last time someone was bit fighting walkers? The scene where they’re fighting walkers on water is already great. But rather than have Spencer and what’s-her-name die at the hand of Negan, we could have also seen Aaron’s demise. The reason Walking Dead is so overcomplicated right now is that there are too many recurring characters that need stories of their own.

As for that finale, where everyone is all smiles again, and every conflict finds resolution, that’s another strange direction the writers took. Would you, as Rick, not want to see how Maggie is doing right after that first episode? Would you not enforce stronger security and scavanging policies for the Alexandria community? Would you not inquire about Carol and Morgan? Yes, Walking Dead characters are often still inexplicably stupid and seem too inexperienced to deal with this world.

That’s why, no matter how great last night’s episode was, I am happy Walking Dead 7 is over for the time being. But seriously… who was that person spying on Rick and Aaron at the lake?!