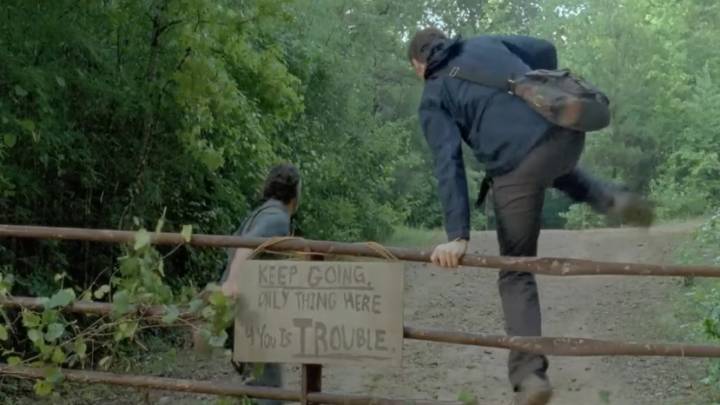 One more Walking Dead episode is over, which means we’ve got new clips to check out from the upcoming next episode. But before we get to them I’ll tell you right away that AMC is now trolling us with these new trailers. What makes me say that? Well, last week’s trailer contained footage that wasn’t even shown in Sunday’s episode. And guess what? Some of that footage is now part of the trailer for episode  7. If you haven’t seen the latest installment look away, you still have time to avoid the spoilers.

So it turns out that episode 6 did not contain any scenes featuring Rick and Aaron, or Morgan. Not even Negan was in it. The trailer for episode 7 — titled Sing Me a Song — will probably show us Negan’s sanctuary, where he delivers the same speech we’ve now heard in two trailers so far. We might even find out where Rick and Aaron are heading, and whether Daryl did in fact help Rick determine which directions the Saviors are coming from.

“A deeper look at the Sanctuary and the world of Negan and the Saviors; members of Alexandria look for supplies,” is what the synopsis says.

AMC also released a sneak peek video that tells us Michonne is embarking on her own quest. We have no idea where she’s headed or what she’s after, but she’s still very skilled with the sword. That said, we’re one episode away from the mid-season finale, which is probably where things are going to heat up again.

“Negan’s unwelcome visit to Alexandria continues as other members scavenge for supplies; things quickly spin out of control,” the synopsis for episode 8 reads, although we don’t have a trailer for the season finale. In the meantime, check out the two videos below for episode 7.