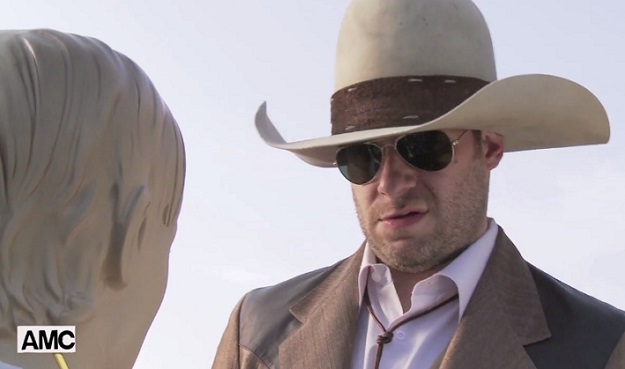 One of the more intriguing and highly anticipated new TV shows of the summer is AMC’s The Preacher. Set to premiere this coming Sunday, the show follows former criminal Jesse Custer (played by Dominic Cooper) who, in an effort to get his life back on track, returns to his Texas hometown to become a preacher.

And from there, the insanity begins.

For those unfamiliar with the title, the series is based on the Preacher comic book series which ran from 1995-2000. Developed by Evan Goldberg, Seth Rogen and Sam Catlin, AMC has been promoting the series hard in recent weeks. Commercials for the show are plentiful and AMC just this week released video of the first four minutes of the first episode.

As part of AMC’s promotional push, the network this week also released a hilarious parody for its own show starring none other than Seth Rogen himself.

“Seth Rogen wasn’t satisfied with just being executive producer and director of the new AMC original series, Preacher,” the video description reads. “He wanted to be the star.”

This result, as you might expect, is equal parts nonsense and hilarity.

For those intrigued in what may very well be AMC’s next hit show, we’ve already reviewed the first four episodes and, suffice it to say, this is definitely a show worth keeping an eye on.