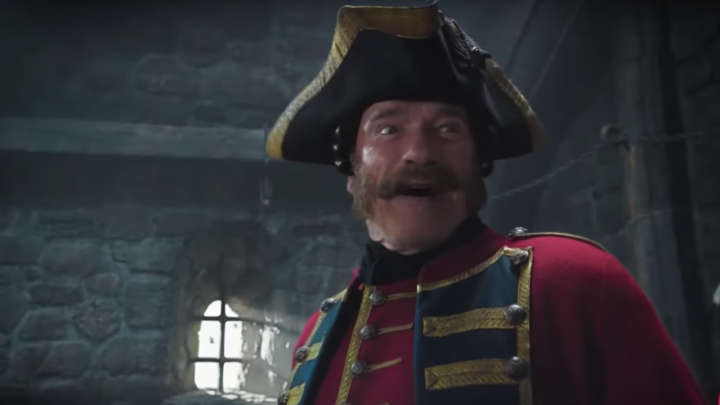 In the first trailer for the new epic fantasy The Iron Mask, there’s a moment when I knew I should have turned it off. Around about the time when Arnold Schwarzenegger, shown with mutton chops and looking resplendent in a military uniform and tri-corner hat, mocks the character played by Jackie Chan who finds himself in chains and in prison.

Crunchy electric guitars can be heard in the background. After an aerial shot of the Tower of London, Arnold’s voice can be heard: “In 500 years, no one has ever escaped. You’re not going anywhere … It’s the tower, haha!” Only, Arnold’s signature Austrian accent renders it as — “It’s the TOW-AHHH!”

At which point, we hear someone mutter, “…so stupid.”

And then, things get REALLY weird.

The rest of the trailer is like the manifestation of word vomit from the writers of a straight-to-VHS ’90s action flick. There’s magic, a dragon, a mystery lady with long, dark hair who performs magic and rides a dragon. As if that wasn’t enough, throw in cringe-worthy dialogue, some sort of quest and then, finally, the first glimpse of the fight scene between Arnold and Jackie Chan that you never knew you needed in your life.

“I’ve been waiting for dis for a long time,” Arnold says, removing his tri-corner hat before the fight. A fight during which Jackie at one point uses a sword to snip off a piece of Arnold’s hair, which allows him to get in a classic dig: “You look better this way.”

The whole thing really must be seen to be believed. According to publicly released details about the film, it’s actually been blessed with a couple of different names (like Journey to China: The Mystery of Iron Mask) before the filmmakers said to heck with that and just shortened it to The Iron Mask. It’s a sequel to 2014’s Forbidden Kingdom, also known as Viy. A US release date is unclear at this point, but now I find myself morbidly curious to see how a film this shockingly bonkers turns out in the end.