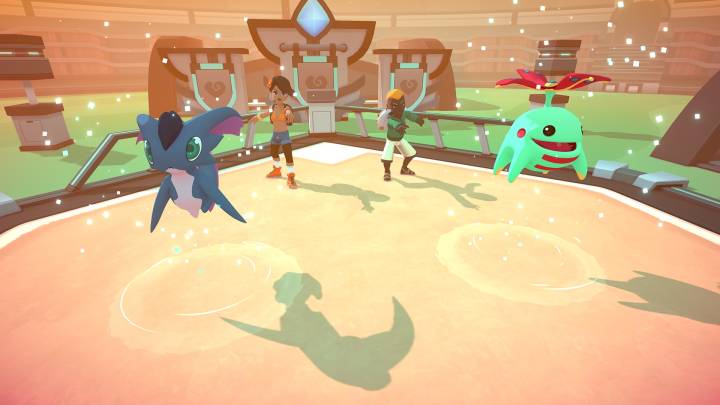 For the life of me, I could never figure out why there weren’t more shameless Pokemon ripoffs floating around. Sure, there are other games that have creatures you can catch, evolve, and battle, but few, if any, feature the exact same formula that made Pokemon so popular (and so addictive) in the first place.

Temtem, a game that entered early access on Steam last week, is the ripoff I’ve been waiting for all these years. The game wears its influence on its sleeve, and by copying everything that makes Pokemon what it is, developer Crema was able to make slight adjustments and alterations along the way to improve the formula and freshen it up for the 21st century. It might not look as nice quite as Pokemon Sword and Shield, but in many ways, Temtem is the true evolution of the franchise many fans have been waiting for since the late ’90s.

On its face, Temtem is Pokemon by everything but its name. To start, your mom wakes you up on the day you are to become a Temtem tamer, and the local professor gifts you with your first Temtem so that you can begin your journey. Along the way, you will level up your Temtem by battling untamed Temtem in the wild and other tamers you meet on the routes between towns. And you can grow your party by catching untamed Temtem with TemCards.

If this sounds familiar, it’s probably because you’ve played a Pokemon game at some point in the last 20 years. But where the latest games in the Pokemon franchise failed to push the concepts forward in any meaningful way other than graphically, Temtem tore some of the foundational elements of the series to the ground and reworked them to make them better. For example, there are no random number generators (RNG) in Temtem battles. In other words, every time you use an attack, it’s guaranteed to hit for the same amount of damage, and every time you attempt to apply a status effect (like poison or sleep), it will be applied for a set number of turns.

Removing those elements of chance from Temtem battles makes them far more strategic and less random. If you go into a fight prepared, and you understand the type differences between the Temtem that will give you an advantage in certain matchups, you have a great chance of succeeding.

The other significant change is the stamina system. In Pokemon, your creature’s moves can be used a set number of times before you need to heal it at a Pokemon Center. In Temtem, any of the four moves a Temtem has equipped can be used an infinite number of times, but they each consume a set amount of a Temtem’s stamina. If a move costs 25 stamina and a Temtem has 20 stamina remaining, it can use the move, but will end up doing 5 points of damage to itself (20 stamina – 25 stamina), and will be exhausted the next turn.

These changes have completely revitalized my interest in the formula where Sword and Shield failed to grab me like I hoped they would. Temtem is genuinely challenging, and while it requires more grinding than modern Pokemon titles, the thrill of defeating a truly difficult dojo leader is something I haven’t experienced since I played the original Pokemon games as a kid. And I’ve only seen a fraction of what Temtem has to offer.

Temtem is still in early access, there are kinks being worked out every day, and only about 50% of the content that will be included in the final release has made its way into the current build, but I cannot wait to see how this game evolves over the next year or so as Crema adds new creatures, new islands, and new features. Plus, Temtem is technically an MMO, with countless other players running around the open world battling and exploring on their own terms, and I’m excited to see how that component changes my experience as I build up a competitive team.

Temtem is available now in early access on Steam for $34.99.