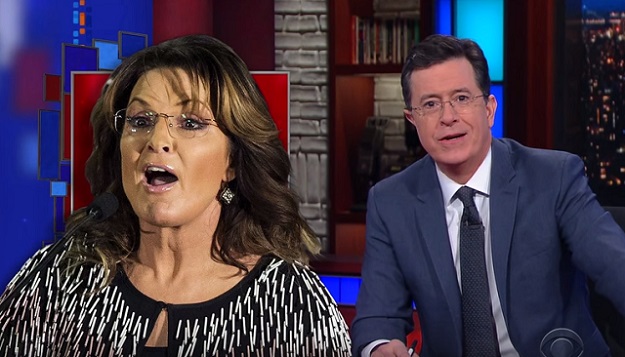 Welcome to the Twilight Zone: Donald Trump is running for President, is doing well in the polls, and has now earned the uniquely vocal support of Sarah Palin. What would have once had the trappings of a Saturday Night Live skit is now a strange reality, and no one is happier about this unpredictable sequence of events than Stephen Colbert.

For anyone who misses Comedy Central’s Colbert Report and thinks that Colbert has lost some of his edge since transitioning over to CBS’ The Late Show with Stephen Colbert, you’re in for a treat. Colbert was in stellar, if not vintage, form on Wednesday night, skewering Palin’s bombastic endorsement of Trump as only he can.

“God I missed you,” Colbert said of Palin as he kicked off his bit. “It’s like a magical eagle made a wish on a flag pin and it came to life. Which is great, for me. Because while Trump, admittedly, has given me so much material to make jokes about, nobody compares to the original material girl.”

And after viewing this video, complete with Palin exclaiming, “we’re not gonna chill, we’re gonna drill, baby drill!”, Palin certainly lives up to her reputation.