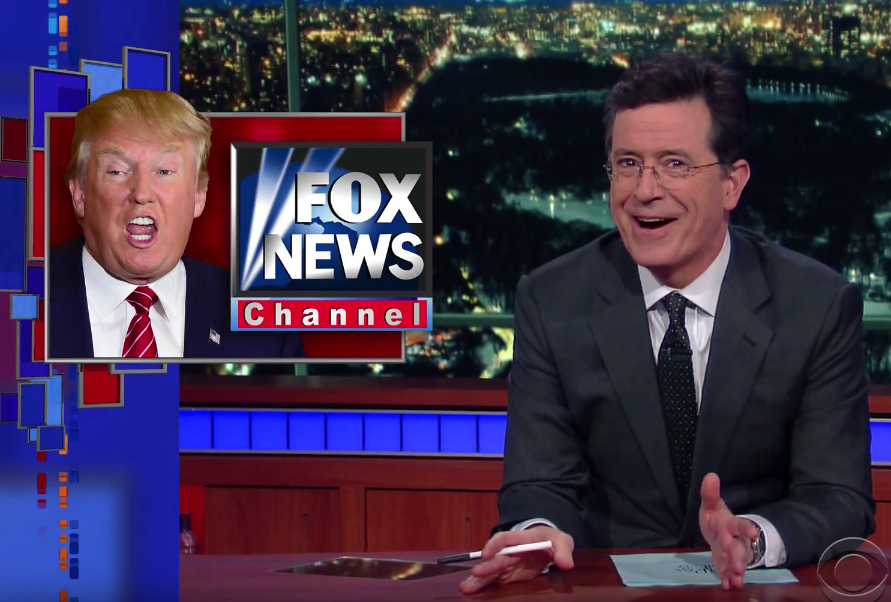 Even though his supporters will tell you he’s a brave truth teller, the reality is that Donald Trump is embarrassingly full of shit when it comes to just about everything. Stephen Colbert has been observing the doughy billionaire for long enough to understand this very simple fact, which is why he held a “debate” on The Late Show Thursday night that pitted Donald Trump against… Donald Trump. Basically, Colbert played clips of some of Trump’s recent statements and compared them to other statements he’s made in which he’s said the exact opposite thing.

In the first clip, Trump trashes Ted Cruz as a “nasty guy” whom “nobody likes.” This is quickly followed by a clip from last year in which Trump said, “I like Ted Cruz a lot.” Next he shows Trump talking about how much he loves the state of Iowa before cutting to a clip of Trump asking, “How stupid are the people of Iowa?” Hillary Clinton, meanwhile, was “the worst Secretary of State in the history of the United States,” even though Trump said back in 2012 that she was a “terrific woman” who “really works hard” and “does a good job.”

And of course there’s Fox News host Megyn Kelly, who went from “doing a great job” in 2011 to being “not very good at what she does” and “highly overrated” this year.

So let this be a lesson to all the white supremacists who have been lining up to support Trump’s campaign: There’s a good chance the doughy billionaire doesn’t actually believe in the “white power” nonsense you’re selling.

And if you don’t believe me, watch Colbert’s full takedown of The Donald below.