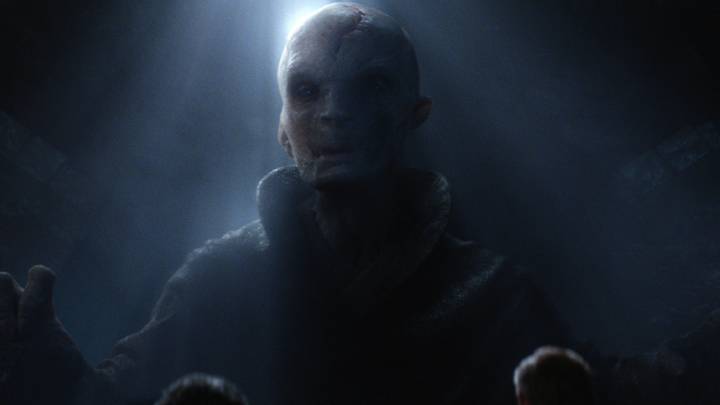 The new Star Wars trilogy brought us a new pair of villains, but we’ve mostly seen one of them in action in The Force Awakens. Come The Last Jedi, we’re going to see more of Supreme Leader Snoke, who happens to be the mastermind behind the remnants of the Empire. He’s to Kylo Ren what Darth Sidious was to Darth Vader: A powerful master of the dark side, who also happens to be Kylo Ren’s boss.

And it just so happens that the Snoke character is played by none other than Andy Serkis. That’s the genius actor who brought a few iconic characters to life, including Gollum in the Lord of the Rings movies and Cesar in the Planet of the Apes remake.

In an interview with Business Insider, Serkis explained how he played Snoke.

If you thought that Serkis just lends his voice to the CGI-animated characters he plays, then you couldn’t be more wrong. Yes, there’s plenty of sophisticated motion capture technology at play here. But it’s all used to precisely copy the face movements and the intensity of Serkis’ emotions as he immerses himself in these roles — you really have to see Serkis reading Trump tweets in Gollum’s voice.

Snoke only appeared in hologram form in the first new Star Wars movie, but he’ll get more screen time in The Last Jedi, as the recent trailer showed. And that’s where we’ll see more of Serkis and his vision for Snoke.

“When I first worked on it with [‘The Force Awakens’ director] J.J. [Abrams] there was an evolving design of the character,” Serkis told Business Insider. “It was going through lots of changes. But it’s all about where a character carries his pain, or aggression, or emotional centers, and with Snoke, it was very much there [putting his hands to the back of his head]. And his skull has got this big scar in the front, so for me, it was a fracturing. He’s got this cleft in his head, and I think it’s very painful for him to speak and yet there’s an imperiousness about him. He’s severely damaged, but there’s a vulnerability that’s he’s trying to cover, so that was sort of what I was trying to do.”

Hopefully, we’ll learn more about Snoke in the upcoming Star Wars film. It’s clear from the new trailer that Kylo Ren’s training is far from complete, so Snoke is also to Han Solo’s son what Luke is to Rey. Not to mention that Snoke will surely try to sway Rey over to the dark side. That’s what the new trailer seems to suggest, not that we’re really surprised. After all, that’s what Sidious tried to do with Luke in the original trilogy.