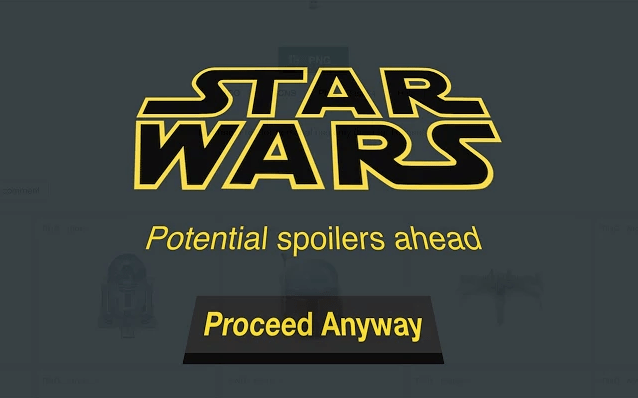 In less than a month, the whole world will be lining up to see Star Wars: The Force Awakens in theaters on opening day. Well, maybe not the whole world, but certainly hundreds of thousands of excited fans. Here’s the problem: if you can’t make it on the first day, you risk the movie being spoiled for you.

If you’re doing everything you can to remain unsullied until you see The Force Awakens yourself, you should think about downloading the Star Wars Spoiler Blocker extension for your Chrome browser.

According to the developer, the extension “blurs a page if Star Wars: The Force Awakens spoilers are detected,” but gives you the option to “proceed anyway” if you’re willing to take the risk.

Once the extension has been downloaded, a small Stormtrooper helmet will be added to the top of the Chrome browser, which allows users to turn the extension on and off. It might not be necessary over the next couple of weeks, but on December 18th (unless you’re lining up at the theater), you might want to keep it turned on.

Star Wars: The Force Awakens releases in theaters on December 18th in the United States, but will launch a day or two earlier in some European countries.