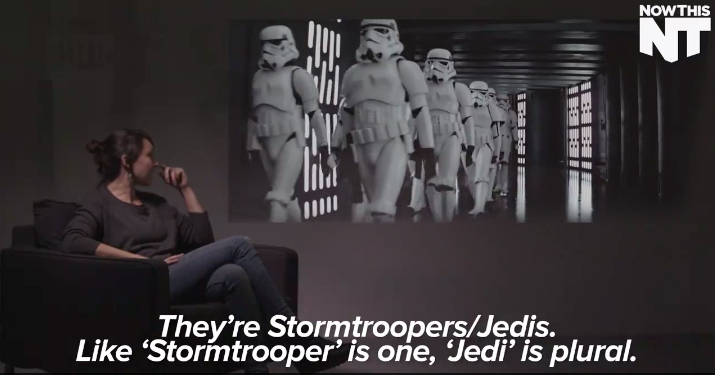 You know they are among us. Maybe you even know a few, relentlessly picking on them for not having seen what are arguably among the greatest cinematic masterpieces of all time. They are the people who have not seen any of the Star Wars episodes to date, so they’re not going to be the easiest to convince to see Star Wars: The Force Awakens.

On the other hand, J.J. Abrams did say in interviews that the new Star Wars movie can be enjoyed both by Force veterans and those people who are new to the universe. Hardcore Star Wars fans will instantly recognize the plot links to the previous trilogies while new viewers will be able to understand Episode VII without fully knowing what has happened before.

However, a hilarious video from NowThis shows that people who haven’t seen Star Wars still have a pretty good idea what’s going on in the movie, but they also get plenty of facts wrong. So let’s fix it.

Yes, Star Wars tells the story of a universe at war. And, yes, the action takes place in space. But it’s not about Earth. And no, our planet isn’t destroyed.

Darth Vader is the bad guy and he’s Luke Skywalker’s father, you got that right. Luke is a Jedi, a disciple of the good side of the Force. And yes, he has to fight his father who’s on the Dark Side. Luke is trained by that green gremlin-like creature who speaks in oddly formed phrases. He’s name is Yoda and strong, he is. Jedi too, he is. Like this, he speaks.

And no, Jedi’s isn’t the plural of Stormtrooper. Those are the white guys in military get-up who are sometimes good, and other times evil, depending on what episode you’re on. The Jedis are a sort of honorable knights who fight with fancy swords, including Luke and Yoda and a young Darth Vader.

Finally, Star Wars starts with Episode IV, because that was the former Episode I of the original trilogy. The more recent trilogy is a prequel, so the old Episode I becomes Episode IV when you refer to them chronologically.

These are some of the simple things you can, and should, explain to your friends joining you next Friday for a spectacular Star Wars event if the Force is not strong with them. And remember to show them the funny video below.