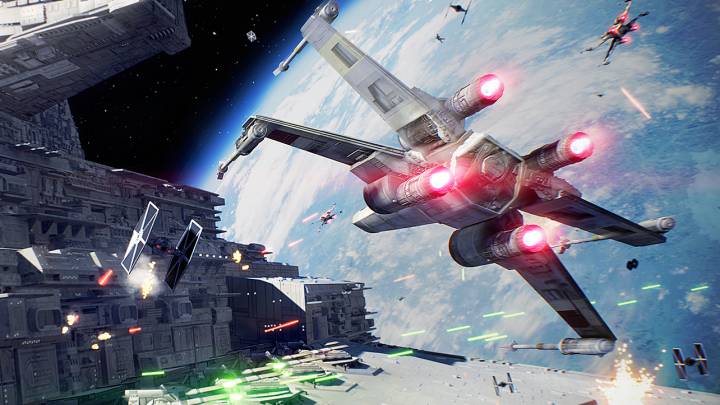 The Star Wars Battlefront reboot from a couple of years ago was a pretty big hit across PlayStation 4, Xbox One, and PC. Star Wars is obviously a hugely popular franchise, so anything less than complete and utter failure meant that a sequel was inevitable. We first got a look at Star Wars Battlefront 2 a couple of months back, but at today’s EA Play event at E3, the company rolled out a lengthy gameplay video as well as an all-new trailer.

What’s immediately apparent from the new footage is that the game is much, much deeper than its predecessor. That’s great news, given how relatively shallow Battlefront was. The first title simply didn’t have a wealth of weaponry or locations, and while the actual mechanics of the online competitive modes were extremely solid, the game lacked an real feeling of progression and accomplishment.

Along with a deeper multiplayer experience, Battlefront 2 includes a single player campaign mode, which is yet another thing EA’s first crack at the revived franchise lacked. It’s a nice bonus, and should definitely give the game a wee bit more staying power than the first, but ultimately the quality of the multiplayer experience is the most important part of a Battlefront game. Thankfully, it appears the Battelfield-esque action is still well and truly present, with a healthy mix of long-range, close quarters, and hand-to-hand combat. Battlefront 2 is due out for PlayStation 4, Xbox One, and PC on November 17th, so if you just can’t wait, just watch the gameplay preview a few hundred times.