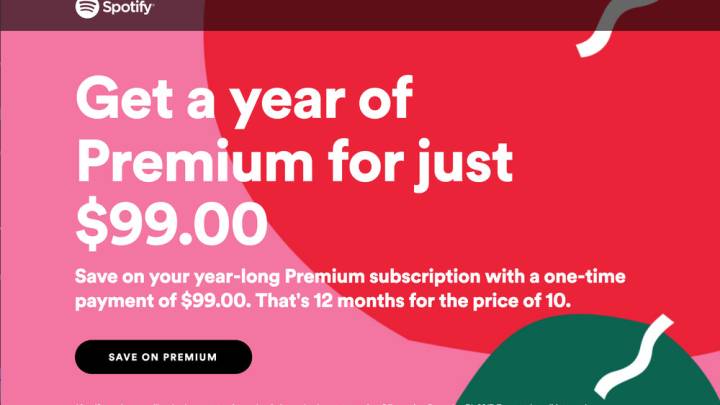 Spotify and Netflix are two things that don’t often go on sale. But thanks to a little Christmas spirit, and a lot of fear of Apple Music stealing its subscribers, Spotify is having a serious sale on one-year Spotify Premium memberships.

The ad-free Premium service, which includes unlimited streaming and features like Google Cast support, is $99 for a full year right now. That’s $20 off the regular price. If you’re a constant Spotify subscriber (hi, friends!) it’s worth taking advantage of the deal right now, just to save $20 next year.

The offer will last for the month of December, according to Engadget, which means it’s also perfect pricing for a Christmas gift. The offer is good for new or existing Spotify subscribers, so like I said, it’s a no-brainer for anyone who already subscribes to Premium. After your discounted year has ended, pricing will revert to the usual $10 per month.

Importantly for the holiday shopping season, this means that Spotify is (at least temporarily) the same price as Apple Music. It’s difficult to break out the number of paying subscribers for both services, but it’s clear that Apple is making at least some headway into a market once dominated by Spotify. Hopefully, this should help even out the playing field for Spotify to keep competing. But in any case, it’s good news for Spotify Premium subscribers thoughout the US, who get $20 to spend on something else next year.