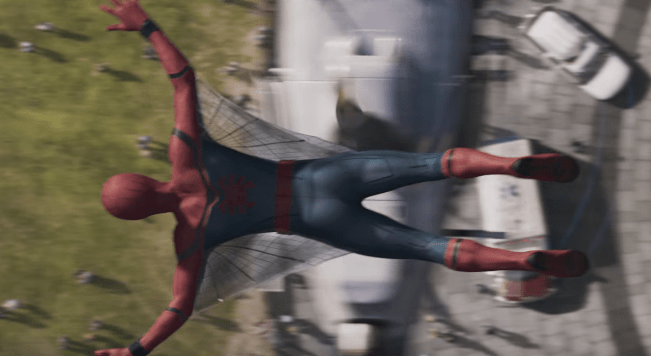 Fourteen years ago, Spider-Man laid the foundation for the superhero movies that would soon dominate the box office. Unfortunately, the insanity of Spider-Man 3 and the subsequent lukewarm reaction to The Amazing Spider-Man reboot all but wiped away any memory of the wildly successful original, which is why Sony had no choice but to let Marvel bring the web-head into the Marvel Cinematic Universe.

Now, almost five years to the day after the last reboot, a new actor is taking on the role of Spider-Man once again in Spider-Man: Homecoming. And we finally have our first peek at what the movie is going to look like.

SEE ALSO: Apple responds to claims that old iPhones have gone up in flames

On Thursday, December 8th, the first trailer for Spider-Man: Homecoming will debut on Jimmy Kimmel Live. In the meantime, here’s a teaser for the trailer:

Yes, that’s Happy Hogan (Jon Favreau) giving Peter Parker (Tom Holland) a gift from Tony Stark (Robert Downey Jr.). Talk about worlds colliding. Marvel has been fairly tight-lipped about the plot of the new Spider-Man, but we know that Marisa Tomei will reprise her role as Aunt May and that Michael Keaton will take on the role of The Vulture — a classic Spidey villain.

Spider-Man: Homecoming hits theaters on July 7th, 2017. Guardians of the Galaxy Vol. 2, the next Marvel movie, will release on May 5th, 2017 and Thor: Ragnarok will round out Marvel’s 2017 releases on November 3rd.