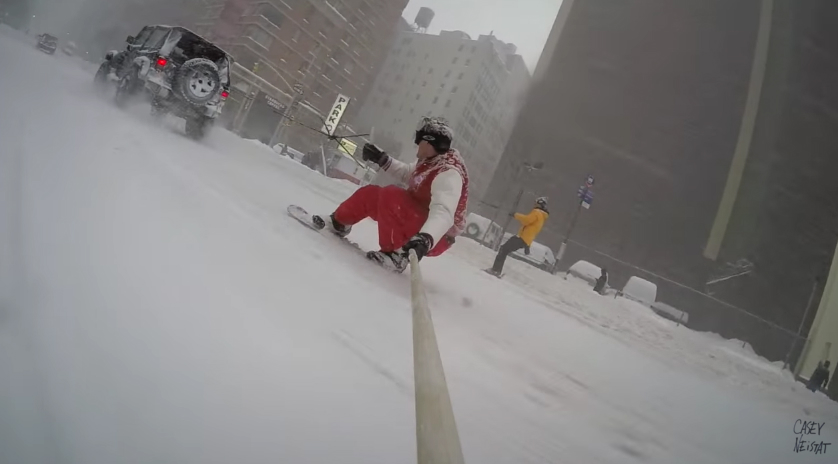 Just as predicted, Winter Storm Jonas turned out to be a massive blizzard that hit the East Cost hard over the weekend with an almost record-breaking amount of snow. Jonas is now the second-biggest snowstorm in New York City history and its 26.8 inches of snow crippled the city’s streets. But not all people stayed indoors during the weekend, and some of them found creative ways to do winter sports out in the streets.

Casey Neistat and Jessee Wellens took out their ski gear, hooked their GoPro cameras up to a Jeep and recorded their amazing snowboarding-and-skiing experiences through the quiet NYC streets. Even the police didn’t seem to really mind what was going on the street, as the YouTube video producers strolled along on the skis and snowboard.

“Someone complained about you, so we’re going to act like we’re talking to you,” an unidentified police officer can be overheard telling them. “You guys are awesome,” Neistat replies.

The whole thing happened on Saturday, and most of the footage was recorded before 2:30 p.m., which is when Mayor Bill de Blasio ordered a shutdown of New York City’s streets.

Neistat’s videos, including an extended Behind the Scenes clip, have gone viral on YouTube, raking in more than 6.5 million hits combined since Saturday – see them both below.