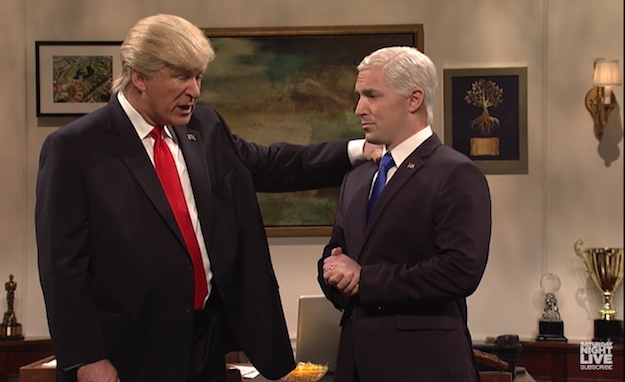 With Donald Trump poised to assume the Presidency this coming January, comedy fans can look forward to four more years of Alec Baldwin pulling off his impeccable Trump impersonation on Saturday Night Live.

Over the weekend, Baldwin was at it again during SNL’s cold open, this time portraying Trump as a bumbling fool completely unprepared and ill-equipped to handle the responsibilities of the Oval Office.

DON’T MISS: Microsoft is offering major discounts on Xbox One games and consoles for Black Friday

Right off the bat, Trump has a conversation with General Dunlap who thanks the President-elect for his big and secret plan that will take down ISIS once and for all. When Dunlap leaves, Trump panics as he takes to his computer and Googles “What is ISIS?”

Overwhelmed by billions of search results, Trump then picks up his phone and asks Siri, “How do I kill ISIS?”, all before realizing that he’s using a Blackberry and not an iPhone.

Later on, we see Jason Sudekis make a surprise cameo as Mitt Romney whereupon the two engage in an awkwardly long handshake before Romney states the obvious, “This isn’t going to work, is it?”

Saving the best for last, we eventually see Trump interact briefly with Mike Pence where the two discuss Pence’s recent night out at the theatre watching Hamilton on Broadway.

As far as SNL’s Trump sketches go, this isn’t one of the better ones we’ve seen, but there are still plenty of laughs to go around.

Funny enough, Trump managed to catch some of SNL this weekend and, not surprisingly, he didn’t come away too impressed.

Taking to Twitter, Trump said the show was not funny and decidedly unfunny.

…@realDonaldTrump
Equal time?
Election is over. There is no more equal time. Now u try 2 b Pres + ppl respond. That's pretty much it.

…@realDonaldTrump
You know what I would do if I were Prez? I'd be focused on how to improve the lives of AS MANY AMERICANS AS POSSIBLE.

…@realDonaldTrump
I would make every effort 2 retrain Americans so 2 cre8 jobs.
1 way u make America gr8 again is 2 put it back 2 work.

…@realDonaldTrump
I would make appointments that encouraged people, not generate fear and doubt.
.