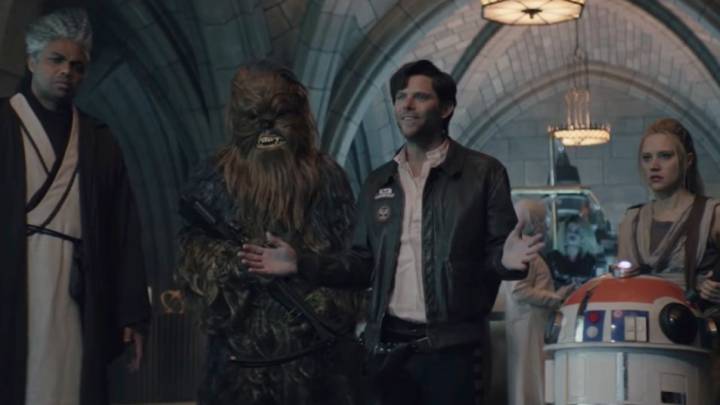 As you might have guessed, it’s based on Star Wars, and the whole thing stinks of Disney involvement, but in a good way. J.J. Abrams introduces the clip as a teaser for a 2019 standalone Star Wars story called The Most Eisley Five, but not before reminding us that Solo is coming soon to theaters.

It’s not your regular SNL sketch either, as it has plenty of props to make it look just like a clip taken from a Star Wars movie. Mikey Day, Kate McKinnon, and Charles Barkley are part of the Mos Eisley Five team, coming to a planet to try to convince Goba (Kenan Thompson) to hand over a Resistance pilot played by Pete Davidson.

We’ve also got a Wookiee, an R2-D2-like robot that’s equally verbose, other aliens, and, of course, the Empire.

What’s really funny about the whole thing is that Barkley’s character, who appears to be some sort of Jedi, is the only one in the room who doesn’t speak any language other than human.  He has no idea what Goba, a Jabba the Hutt-like character, has to say, nor does he know the robot and the “dog” can actually speak.

“Man, how do y’all speak so many languages,” Barkley asks at one point. “This is crazy, I only speak human.”

“These aliens are talking with you in their language you answer them back in our language, everybody understands each other… Makes me feel stupid,” he rants, wondering how they all learned it all. Unnamed Jedi character played by Charles Barkley, we totally hear you, you’re not alone.

Check out the entire clip below.