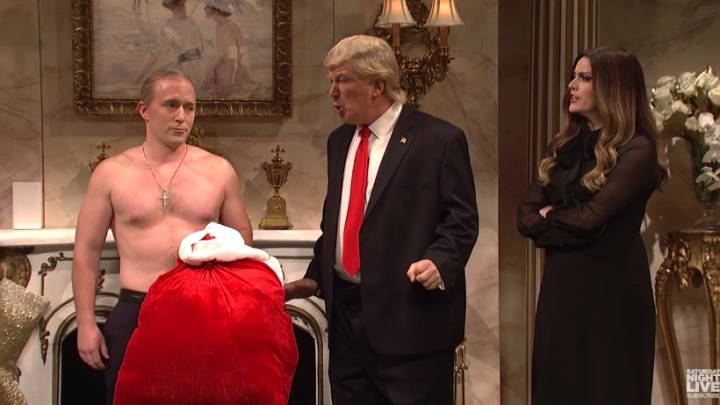 Saturday Night Live made fun of Donald Trump throughout the presidential campaign and in the weeks that followed his surprising election, focusing on many of the various Trump controversies that popped up each week. Last week, the popular show targeted the alleged Russian involvement in the US presidential election, making Trump out to be Vladimir Putin’s gift to America for Christmas.

While a bare-chested Putin (played by Beck Bennet) was the main focus of the cold open, SNL took shots at Melania Trump and Trump’s cabinet picks as well. SNL did not let Trump’s embarrassing Twitter snafu go to waste — the president-elect wrote on Saturday morning that China’s seizure of a US Navy underwater drone was “unpresidented” rather than unprecedented.

“This guy has so much energy [at Dancing with the Stars],” Baldwin’s Trump said about his Rick Perry nomination for secretary of energy. “It’s just unpresidented.”

The best jokes included Putin, who called Trump “the best candidate,” “the smartest candidate,” and “the Manchurian candidate.” Hints that Putin would spy on Trump were more than obvious, as Trump got an “Elf on the Shelf” toy that should be placed near his internet router at all times.

“Vladimir, I’m sorry, but I didn’t know you were coming, so I do not have a gift for you,” Baldwin’s Trump said. “Please, Mr. Trump, you are the gift,” Putin replied.

As soon as Goodman stepped in as Tillerson, he and Putin started ignoring Trump, talking about oil drilling and other seemingly serious matters. Trump tried to intervene with remarks about Vanity Fair and Kanye, all to no avail.

The real Donald Trump has not yet commented on SNL’s latest sketch on Twitter, as he’s done in the past. Check out the entire clip below.