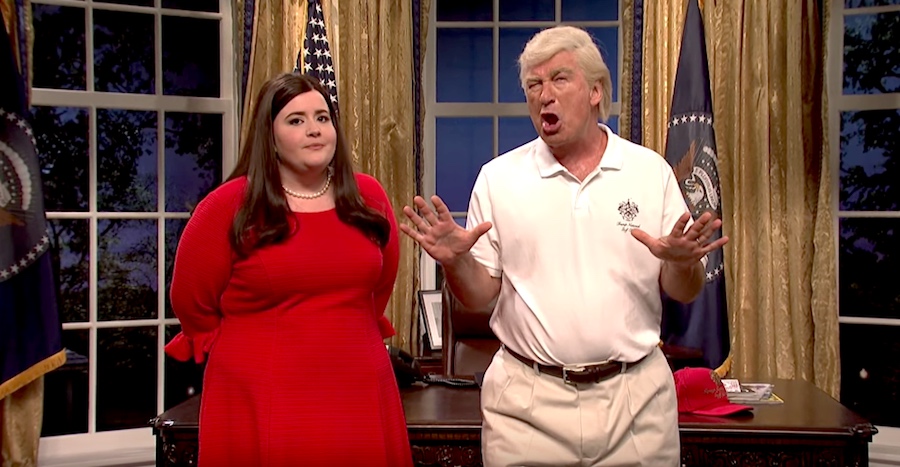 In a surprisingly strong first episode of Saturday Night Live’s 43rd season, the show’s cold open this weekend featured Alec Baldwin reprising his role as Donald Trump. And in typical fashion, the opening sketch also included some mockery of other prominent figures from Trump’s administration, including Jeff Sessions and Sarah Huckabee Sanders, the latter being Sean Spicer’s replacement.

The clip begins with Trump talking with Sanders, played ably by Aidy Bryant, as the topic quickly turns to the recent hurricane that recently savaged Puerto Rico. Shortly thereafter, Mayor Carmen Yulin Cruz of San Juan calls in where she explains that Puerto Rico needs the help of the United States.

“We’re going to get more help to you, probably by Tuesday or Wednesday at the latest,” Trump responds. When Cruz says that that’s not good enough given the gravity of the situation, Trump answers, “Well you should have paid your bills. FEMA takes a few days unless you join FEMA Prime.” When Cruz asks Baldwin’s Trump character what he’s talking about, Baldwin makes light of Trump’s recent and somewhat bizarre marks regarding Puerto Rico being an island.

“I don’t know if you know this,” Trump exclaims, “but you’re in an island in the water. The ocean water. Big ocean. With fishies and bubbles and turtles that bite. We want to help you, but we have to take care of America first.”

Upon being informed that Puerto Rico is an American territory, Trump feigns knowledge of this fact before hanging up the phone and calling Cruz a nasty woman. About halfway through the clip, Jeff Sessions played by Kate McKinnon makes an appearance and more laughs ensue.

All in all, the opening sketch was solid, but the real gems came later in the show. Arguably the best two sketches of the night involved a video about ‘woke jeans’ and the Papyrus font used on the film Avatar. You can check out those two clips below.