It’s crazy to believe that Seinfeld, a show that is still popular and in heavy rotation on TV today, is almost 30 years old. Indeed, today marks the 27th anniversary of the airing of the original Seinfeld pilot which debuted on NBC way back on July 5, 1989.

Famously, Seinfeld was not an immediate hit. In fact, initial ratings for the show were so bad that the bigwigs at NBC even contemplating canceling the series altogether. Given the landscape of TV these days, if Seinfeld debuted today with similarly abysmal ratings, it’s entirely likely that the show would have been canceled before being able to find it’s footing. But as the story goes, executives at NBC in the early 90s didn’t have anything to replace Seinfeld with so they were able to give it more of a runway than they might have otherwise been inclined to do.

DON’T MISS: Apple is finally killing the 16GB iPhone with the iPhone 7

And the rest, as they say, is history. In light of Seinfeld’s 27th anniversary today, we thought we bring your attention to the pilot that I got everything started. Indeed Seinfeld at the time was actually known by different name, the Seinfeld Chronicles.

But enough time, let’s get to the good stuff. Below you can find the entire pilot for the original show. Suffice it to say, it’s an interesting walk down TV memory lane.

And for any history/Seinfeld buffs out there, here’s an AP newspaper article detailing the premiere of the now-historic show. 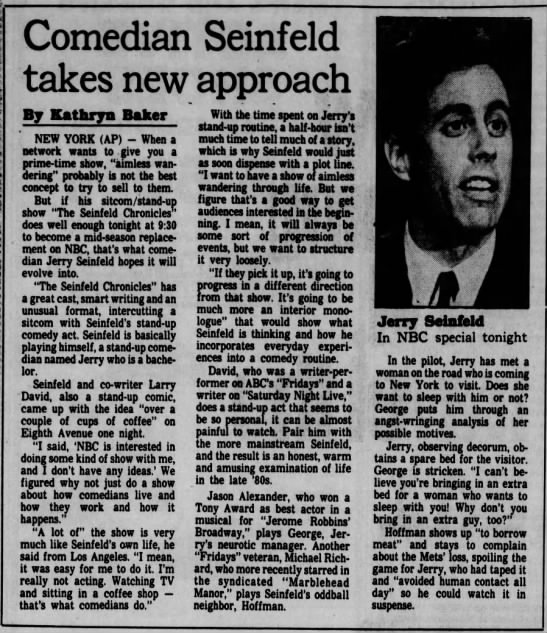