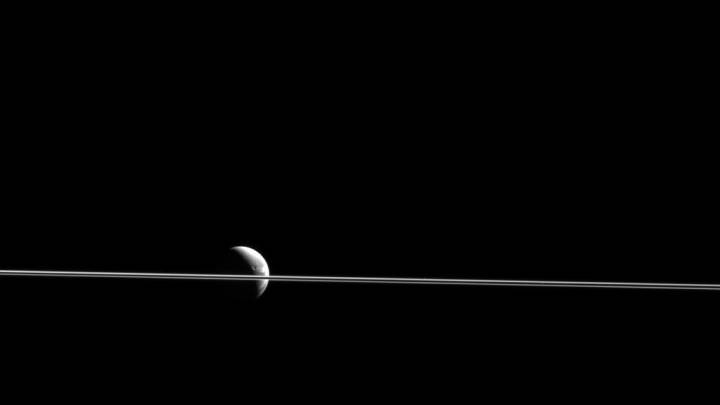 Saturn and its rings may be a long way from Earth, but that doesn’t mean we can’t snap lots of photos of the distant planet. In fact, taking pictures of Saturn is part of the job for NASA researchers, who have captured a stunning shot of several objects in the planet’s orbit.

As you can see in the image above, NASA caught a glimpse at Saturn moon Dione that appears to be cut in half. This optical illusion is possible thanks to Saturn’s rings, which look like they are cutting the moon right in half.

The photo was captured by the Cassini orbiter last year, a spacecraft that has been orbiting Saturn since 2004, after being launched from Earth in 1997. Even so, NASA only released the image on Tuesday and provided more information about the shot in the process.

Cassini was 1.4 million miles away from Dione when this particular alignment occurred last Christmas, and that’s why Saturn’s rings appear to be “razor thin.” At that range, each pixel of the photo represents 1.4 miles of space. That’s why the rings appear so thin, though in reality these ice and rock formations around Saturn actually measure from 30 to 300 feet in thickness.

Dione is just one of the more than 60 moons orbiting around Saturn, so we can expect similar photos in the future. The moon measures 698 miles in diameter, which is quite small compared to our planet’s 2,159 miles diameter.

Read more about this Saturn photo at this link.