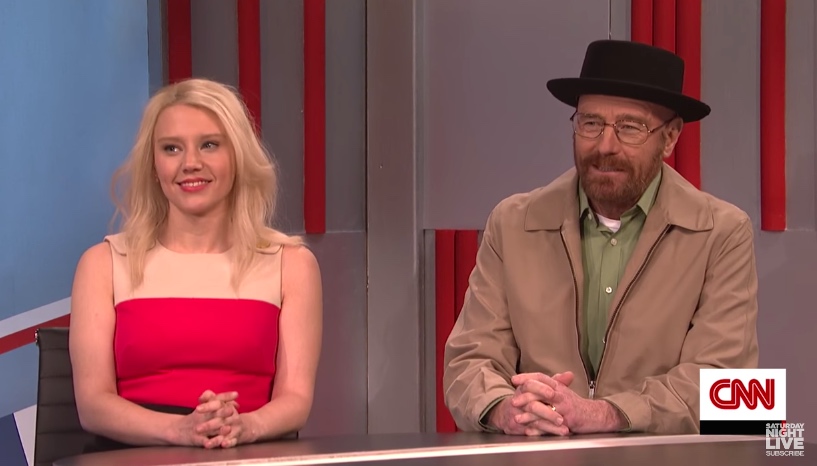 Saturday Night Live gave us a much-needed reprieve from Alec Baldwin’s Trump impersonation this weekend. Sure, Baldwin’s take on Trump is great, but the last few Trump-themed sketches have been a bit on the mediocre side. That said, it’s not as if SNL completely moved away from all things Trump this past Saturday. On the contrary, we saw a clever cold open that centered on Donald Trump picking Walter White of Breaking Bad fame to head up the Drug Enforcement Administration (DEA).

The idea behind the sketch, for anyone who has been taking a break from politics as of late, is that some of Trump’s recent cabinet picks have elicited a good deal of controversy, largely because some of his picks seem to have peculiar qualifications and worldviews relative to the positions they’ve been chosen for. In light of that, bringing in Bryan Cranston to reprise his iconic Walter White character was nothing short of brilliant.

The sketch itself spoofs CNN’s popular weekday program — The Lead with Jake Tapper — and features Beck Bennet as Jake Tapper and the multi-talented Kate McKinnon pulling off a solid Kellyanne Conway impersonation.

The festivities begin with Tapper asking Conway about Scott Pruitt, Trump’s choice to head up the EPA.

“Trump has nominated Oklahoma Attorney General Scott Pruitt to head the EPA even though he’s a fossil fuel advocate that doesn’t believe in climate change,” Tapper says. Not missing a beat, Conway responds with a nice one-liner: “Well yes, actually, Scott Pruitt is excited for the job and is ready to protect us from the environment.”

About one minute and 40 seconds into the clip, Walter White makes his illustrious return to TV. Needless to say, there are more than a few well-placed Breaking Bad references throughout the segment. For instance, White towards the end explains: “Donald Trump and I agree that it’s time to make America cook again. We want to fill this nation with red, white and a whole lot of blue.”

You can check out all of the Donald Trump meets Walter White hilarity below.