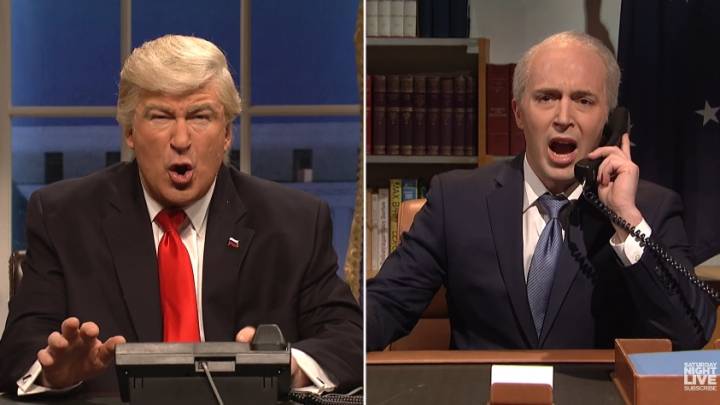 Alec Baldwin returned as a guest star on Saturday Night Live this weekend where he, surprise surprise, donned some orange self-tanner, an absurd wig and proceeded to lampoon Donald Trump as only he can. During the show’s cold open, Baldwin as Trump appeared in the Oval Office where he picked up the phone and called a number of world leaders from different countries. The inspiration for the sketch, of course, stems from reports that Trump may have hung up on the Australian Prime Minister during a phone conversation earlier in the week.

With Trump advisor Steve Bannon comically portrayed as the Grim Reaper, Trump first decides to call up a few U.S. allies for conversations that invariably lead to Trump childishly threatening to go to war. After some entertaining phone calls with Australian Prime Minister Malcolm Turnbull, Mexican President Enrique Peña Nieto and German Chancellor Angela Merkel, SNL decided to save the best for last.

The end of the sketch features a battered and defeated Trump having the bright idea to call up a less powerful country that he might have an easier time picking on and bossing around. He ultimately decides to give Zimbabwe President Robert Mugabe a call.

A controversial figure whom some critics characterize as a dictator, Mugabe, played brilliantly by Kenan Thompson, comically relayed that when it comes to exerting crazed dictatorial power, Trump still has a long ways to go.

“I will rip out your spine and drink from your skull,” Mugabe shouted at a surprised and somewhat speechless Trump.

The sketch finally ends with a joke about how Trump isn’t truly in command but is actually nothing more than a puppet being controlled by Bannon.

Trump has been quick to respond via Twitter to unfavorable SNL depictions of himself in the past, but he’s yet to comment on SNL’s latest skewering.