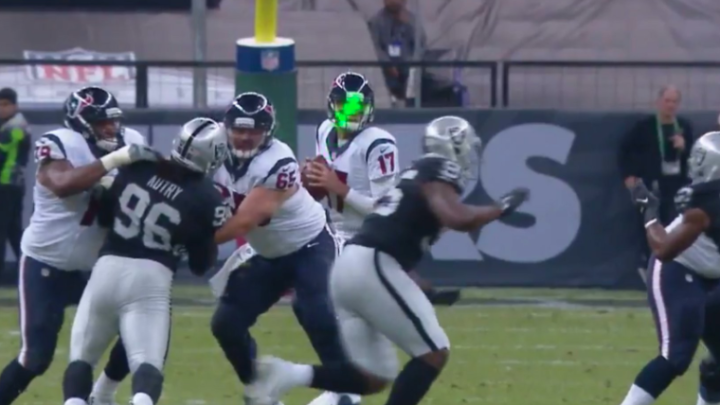 Every kid learns at a young age not to shine laser pointers in other people’s eyes. It’s annoying, distracting, and potentially even harmful, not to mention that it’s just a rude thing to do. That didn’t stop some Oakland Raiders fans from using a laser to their advantage in last night’s matchup against the Houston Texans.

At several points throughout the game, Texans quarterback Brock Osweiler had to deal not only with a punishing Raiders pass rush, but also a massive green laser in his eyes thanks to some knucklehead in the crowd.

there's a fan using a laser pointer at the texans and raiders game pic.twitter.com/AJg3qg1Dmn

At one point, ESPN’s commentators addressed the impromptu light show and noted that stadium security was on the hunt for the culprit. No further update was given throughout the matchup, but it appeared on several occasions.

The game was being hosted at the Estadio Azteca stadium in Mexico City, as part of the NFL’s continued ambitions to bring American football to fans in other countries. During soccer matches — which is what the venue typically hosts — fan distractions like laser pointers pop up from time to time, though it’s more rare to see such a thing in an NFL game. If anything, a drunk idiot on the field is more common here in the states.

The primary target of the laser’s wrath, Texans QB Brock Osweiler, didn’t blame the distraction for his team’s loss entirely, but he did claim that it was a contributing factor.

“I’m still gathering information on what exactly took place, but all I know at this point is when we were out there on the field on offense, there were multiple times I saw a green laser coming from the stands,” Osweiler told reporters after the game. “There was a couple of times it definitely hit me in the eye. And it was very noticeable. I never want to say one thing is a difference-maker, but certainly, having a laser zoomed in on your eyeball definitely affects how you play a game.”

It’s worth noting that the crowd that gathered in Mexico City was overwhelmingly in favor of the Raiders, so whoever was using the device to throw the Texans QB off his game was probably at a reduced risk of being called out by their fellow attendees.