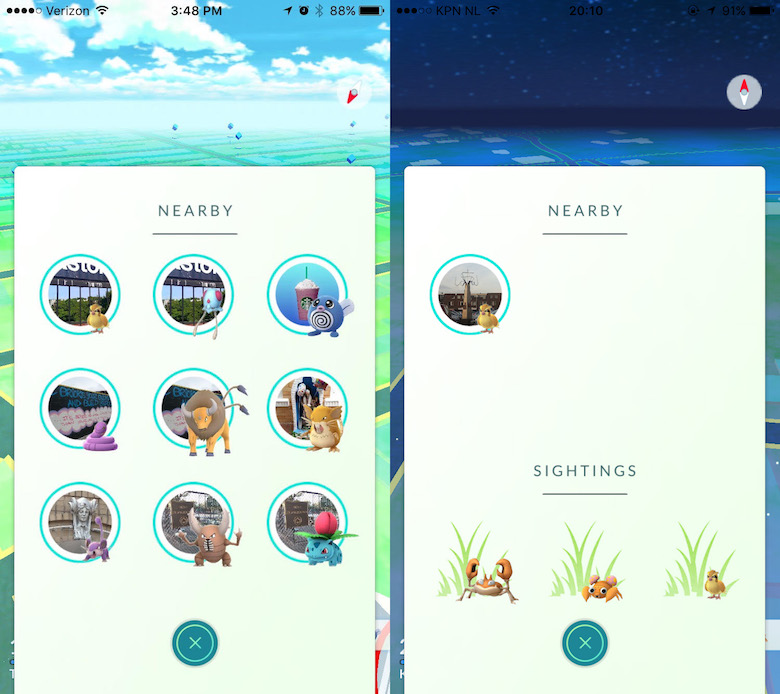 Ever since Niantic scrapped the original Nearby tracker, Pokemon Go players have been begging for the company to bring it back. There’s no question that it had its flaws, but the Sightings system that replaced it was useless, and the new tracker only detects Pokemon within a certain range of nearby PokeStops.

Although the latest tracker (which only recently rolled out beyond the San Francisco Bay Area) is better than nothing, it’s a huge slap in the face for rural players who don’t have any PokeStops in their area.

Thankfully, on Friday, Niantic pushed out an update that should make everyone happy.

Today, Niantic expanded the latest Nearby feature to “most regions of the world” where Pokemon Go is available with one very important change: Sightings have returned. If there aren’t enough PokeStops in your location to fill out the Nearby tab, Sightings will be displayed alongside them (or in place of them altogether if there aren’t any PokeStops around).

Most players would simply prefer that Niantic bring back the footprints from the first version of the app, but that clearly isn’t on the table. This is a reasonable compromise that will give rural players the ability to see nearby Pokemon once again and shouldn’t have a negative effect on suburban or urban players.

That said, urban players might suffer from a case of FOMO, as Sightings don’t appear when PokeStops are plentiful. I live in New York City, which means I’m never more than a few blocks from a dozen or so PokeStops. That means that I will never see Sightings unless I pack my bags and leave the city.

Nevertheless, Niantic specifically refers to this as a “test,” so we’ll likely see a few more renditions of the Nearby feature before the company settles on a design that makes more players happy than it does mad.