If you’ve spent a significant amount of time playing Pokemon Go over the past few weeks, there’s a good chance that you’ve managed to collect a few formidable Pokemon along the way. But now that you’ve got some powerful virtual friends, what are you supposed to do with them?

It’s about time you started taking over some gyms.

Last week, we published a story about the strongest Pokemon in Pokemon Go. These are the Pokemon you should be most dedicated to finding, but no matter how strong an individual Pokemon is, it’s still going to be weak to certain types of Pokemon and strong against others. Unfortunately, the game doesn’t have any sort of database or instruction manual to explain this.

That didn’t stop the internet from finding out anyway. 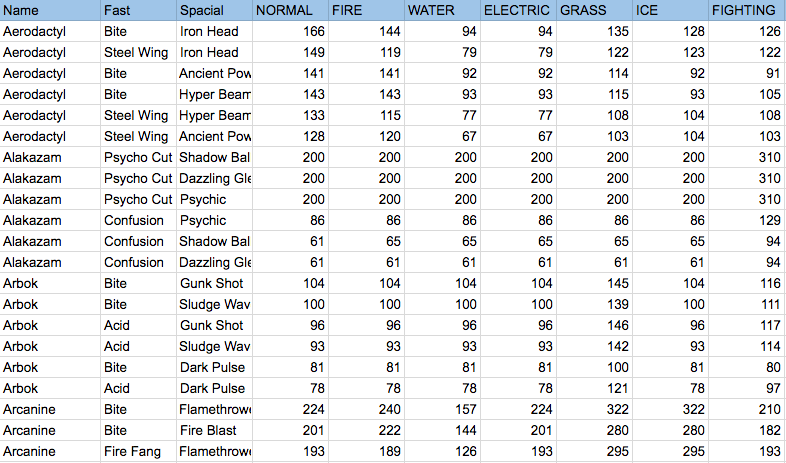 What you’re seeing here is a small portion of The Silph Road’s massive “Top DPS & Damage” spreadsheet, which can help you decide which Pokemon you should bring into any given battle. For example, as a fire type, Arcanine does massive damage against grass types, but flounders against water type Pokemon.

When you visit the spreadsheet, you’re probably going to be overwhelmed. There are 10 tabs, all filled with rows and rows of text and numbers, but you really only need to focus on the first two. The first tab will show you the most powerful possible Pokemon you can acquire in descending order, while the second tab will show you the best matchups for your Pokemon depending on their movesets.

This is not going to be all that useful for casual players, but if you want to take over every gym in your city, it’s an invaluable resource.