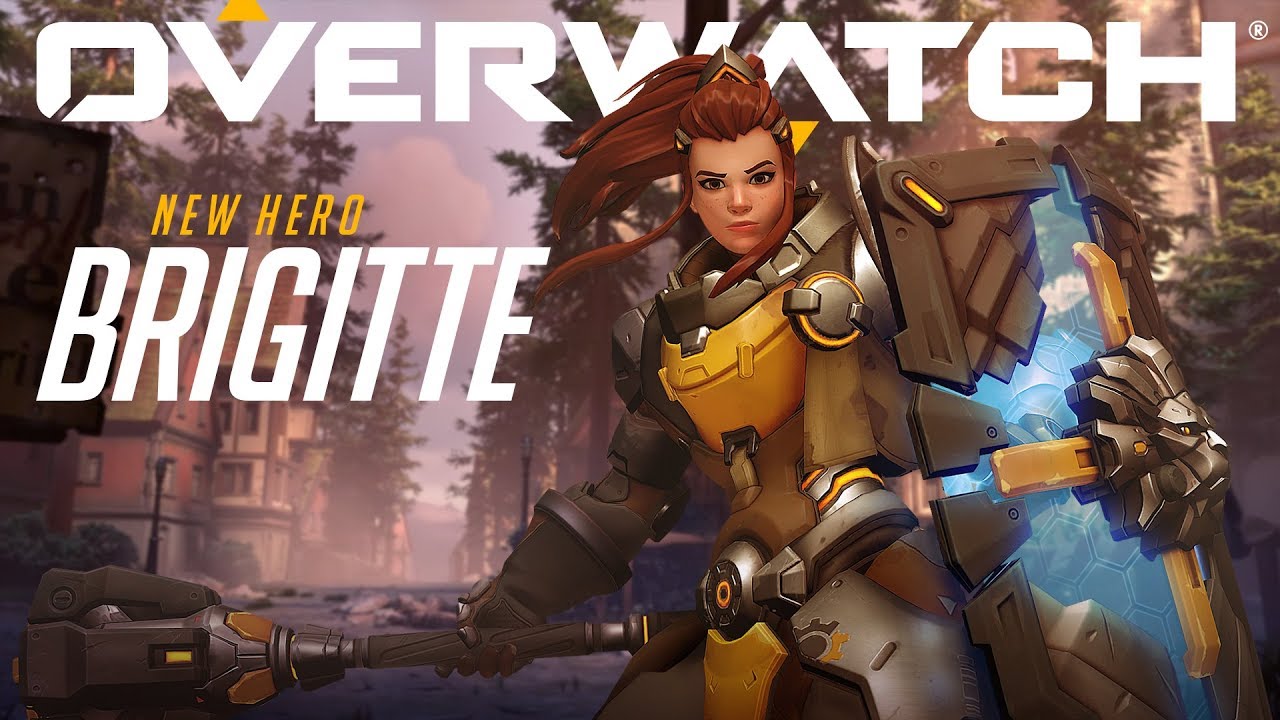 Bridget? Bri-get-te? It’s actually Brig-git-te, and however badly you might pronounce it, Overwatch‘s newest hero is finally available for everyone to play. The latest patch has rolled out for PC, PS4, and Xbox, which means it’s time to get those instalock fingers ready and hit up Quick Play.

Brigitte is only available in Quick Play and Arcade maps for the time being, and she’ll only move over to Competitive at the beginning of the next season. Still, all that means is there’s plenty of time to practice with her before taking her into serious games, and if all my time playing on the PTR is any indication, she’ll be a benefit to most team comps.

In the Overwatch lore, Brigitte is the daughter of Torbjörn Lindholm, Overwatch‘s chief engineer and the builder of many turrets. She’s also Reinhart’s squire, which means she’s part support, part tank, part DPS.

Her main kit resembles a lot of Reinhart’s weapons and equipment, just scaled down. She has a melee flail similar to Reinhart’s rocket hammer, but with a slightly longer radius. It only does 35 damage per hit with no headshot, so you’re going to have to get five swings in to kill most squishies. However, each hit heals nearby allies by 75 health over a 5-second duration, so combining her healing with Lucio in the middle of a team fight makes all your allies difficult to kill. If you left-click while you have the shield up, Brigitte will dash forwards, stunning an enemy and inflicting 50 damage. It’s good as a combo used with the whip flail to kill enemies like Tracer or Genji.

She also has a shield that operates much like Reinhart’s, but it’s much smaller and only has 600 health. It’s more of a personal shield, but you can often jump in front of an ally that’s about to die and absorb damage until they can disengage, which makes it useful when you’re poking. In addition, she can target allies with a Repair Pack, which adds 150 health if they’re low, or 75 armor above max health if they’re already topped. The additional armor only lasts for 5 seconds, but the health stays indefinitely. The targeting and range is similar to a Zenyatta orb.

Finally, Brigitte has a whip shot, which targets similar to Roadhog’s hook, but knocks an enemy back rather than pulling them in. It does 70 damage, so in a combo with the shield bash it can bring most DPS to nearly dead. It’s also good for getting environmental kills or knocking down enemies from a ledge.

In playstyle, Brigitte is heavily reliant on having a group of allies fighting around a payload or point. Since she doesn’t have any active healing other than the repair pack, she absolutely has to be paired with a more powerful healer, preferably something like Ana, Mercy, or Moira. However, she’s also a good DPS when she’s fighting as a group in close, and she counters a lot of the irritating DPS like Tracer or Genji. I actually think that she might usher in the three-support comp, as combining her with two more DPS-y healers like Lucio and Moira, one shield tank, and two hitscan DPS is hard to counter.

An engineer with peerless armor-constructing abilities, Brigitte Lindholm is a valiant squire who fights on the front line to protect her allies.

Brigitte’s armor engineering capabilities make her a stalwart support hero, capable of holding her ground in combat while also providing healing and armor for her teammates. Her primary weapon is her heavy-hitting Rocket Flail that she swings in a wide arc in front of her to smash multiple enemies at once. Whip Shot enables Brigitte to fling her flail forward, striking enemies at a distance and knocking them backward. With each blow, Brigitte’s passive ability, Inspire, heals nearby allies over time.

Brigitte’s Barrier Shield deploys a frontal energy barrier that can absorb a limited amount of damage and protect any allies directly behind her. Once her Barrier Shield is deployed, she can use Shield Bash to lunge forward and stun the first enemy in her path. Drawing on her engineering prowess, Brigitte can create Repair Packs to instantly heal wounded allies or provide armor to teammates at maximum health. When Brigitte is at her strongest, she can activate her ultimate ability, Rally—a galvanizing call to arms that generates a substantial amount of armor for nearby allies and increases Brigitte’s movement speed so she can lead them into battle.

Developer Comments: Developer Comments: We’re also removing the 0.1 second window of time during a hack where it couldn’t be canceled via line of sight or with other abilities including Tracer’s Recall and Zarya’s Particle Barrier, which was originally put in place so the hack wouldn’t be interrupted by small objects such as light posts. We’ve implemented a separate fix for that issue, so she should still be unaffected by those small objects.