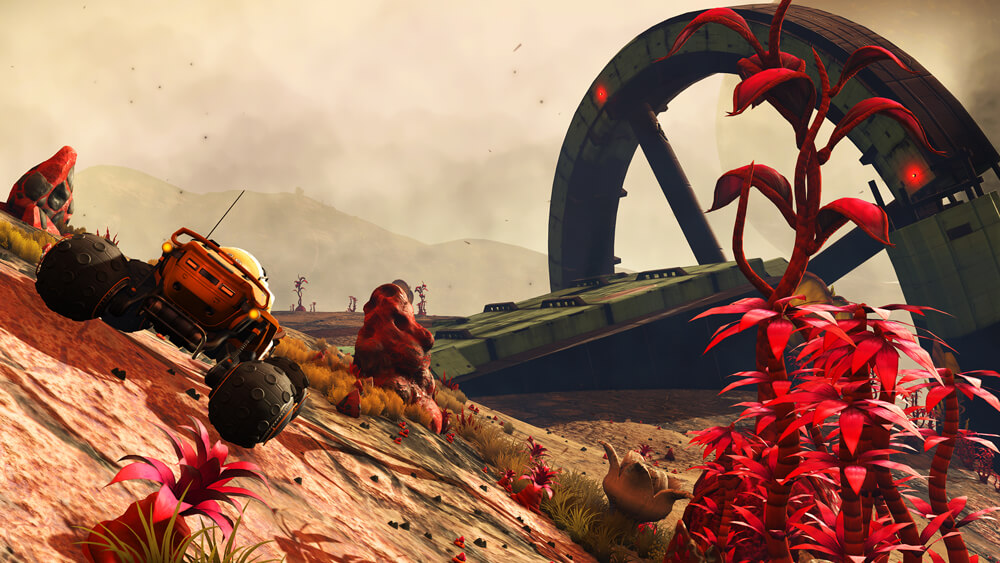 In celebration of the one-year anniversary of No Man’s Sky, developer Hello Games has just released the most substantial update that the game has ever seen. If you’ve been looking for a reason to jump back into the controversial universe simulator, there are about a dozen in the new Altas Rises update.

First and foremost, Atlas Rises (Update 1.3) introduces a brand new central storyline to the game, which includes a new quest system, a new race of interdimensional beings and 30 hours of story content. One of the biggest disappointments regarding No Man’s Sky at launch was the lack of a cohesive, compelling story, but Hello Games is looking to rectify that misstep a year later.

In addition to the new story, Atlas Rises also improves navigation between planets and systems, increases the variety of planetary biomes, adds giant, crashed freighters to planet surfaces, introduces a new mission system, adds depth to the trading system, upgrades the Analysis Visor, overhauls the UI and opens up terrain editing with the Multi-Tool. And that’s still not everything. The update also makes the game look better, which you can see in the video below:

Believe it or not, we’re still not done. On top of everything listed above, the update also unlocks ancient portals that can be used to quickly jump between planets and bases, improves space combat, adds the ability to cruise above the surface of a planet in low flight and, perhaps most importantly, gives players the ability to meet and interact with each other in-game for the first time.

“Visualised by strange floating orbs, up to 16 players can see and communicate with one another, and explore the universe together,” Hello Games explains on its website. While interaction is limited, players who run into one another will be able to communicate via proximity based voice chat. Hello Games says that this is an important first step, so expect added functionality in the future.

Incredibly, that still doesn’t cover everything in the Atlas Rises update, so be sure to head over to the No Man’s Sky website if you want to know more. Also, the update has begun rolling out, so be sure to check for an update on whichever platform you play No Man’s Sky on to start downloading.