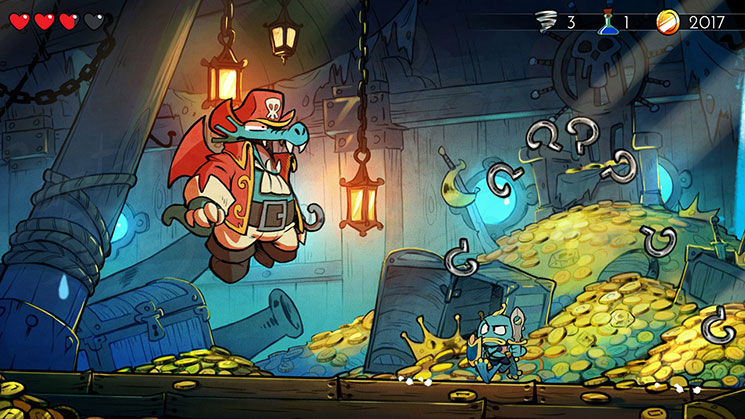 Ever since the Switch launched last month, Nintendo fans have been anxiously awaiting the next blockbuster release. Unfortunately, ARMS and Splatoon 2 won’t launch until this summer and Mario Kart 8 Deluxe won’t be ready until the end of the month, but on Tuesday, an intriguing multiplatform retro remake made its way on to the Switch eShop. It might not have been on your radar, but the rave reviews it’s been receiving may convince you to give it a closer look.

Wonder Boy: The Dragon’s Trap is an HD remake of a beloved Sega Master System game from 1989. Developer Lizardcube and publisher DotEmu originally announced that they were working on a remake last summer, and now less than a year later, the game is available on PS4, Xbox One and Switch.

The Dragon’s Trap follows Wonder Boy as he traverses through an interconnected, 2D world fighting monsters and attempting to break the curse that has him transforming into different animals. As he defeats bosses, he unlocks new transformations that allow him to reach areas that were previously inaccessible.

You can get a basic idea of what the game has to offer in the Switch launch trailer below:

Along with the improved (hand-drawn) visuals, the remake also features a re-orchestrated soundtrack, 3 distinct difficulty levels, the ability to play as Wonder Girl and the option to switch to 8-bit mode at any time. With a score of 79 on Metacritic, it’s already one of the 10 highest scoring games available on the console as well. If you’re looking for something to bide the time until Mario Kart arrives, you could do worse than Wonder Boy.