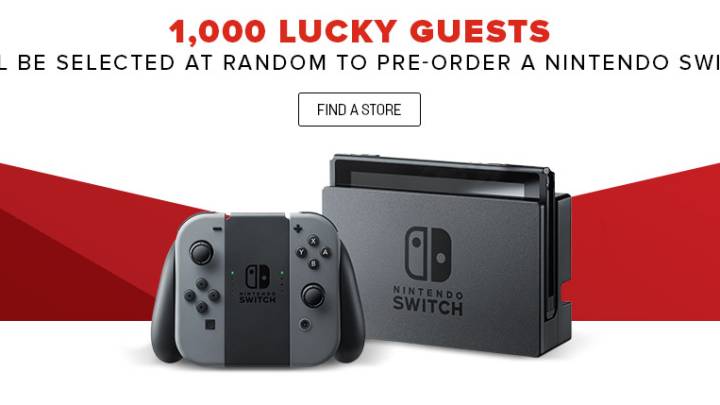 On Saturday, February 11th, GameStop is once again hosting its Power-Up Rewards Pro Day sales event. Along with discounts on games, hardware, strategy guides and apparel, the retailer has revealed that it is also going to choose 1,000 customers at random to preorder the Nintendo Switch. The customers who are chosen will have the opportunity to preorder Nintendo’s upcoming console, which is sold out virtually everywhere.

If you want to have a chance to have a chance to preorder a Nintendo Switch (this is honestly beginning to give me a headache), you need to actually be in a GameStop store at some point on Saturday during the Pro Day event. It’s unclear exactly how a customer can make him or herself eligible to be chosen for the preorder opportunity, but a spokesperson tells us that you don’t have to be a Power-Up Rewards member.

With the launch of the console just three weeks away, this could be one of the last chances that consumers have to lock in a preorder. GameStop says that anyone who preorders the console through this promotion will be guaranteed a Nintendo Switch on launch day — March 3rd — as well.

With that out of the way, here are a few of the best deals GameStop is offering for Pro Day: