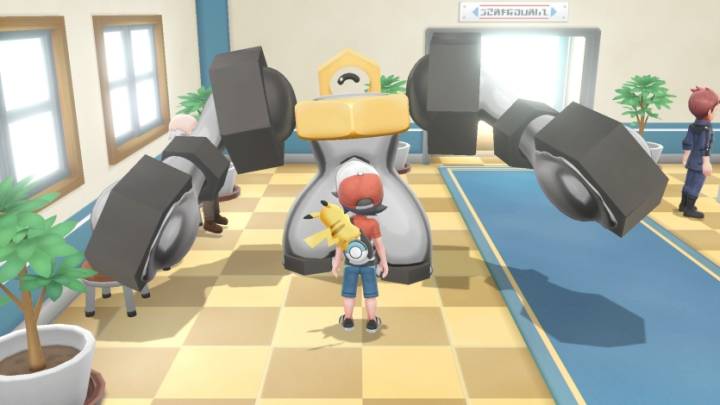 The Pokemon Company has been drip-feeding us hints about the new Pokemon species Meltan in recent weeks, but it appears that the mystery has finally been solved. In a video update, Professors Willow and Oak confirmed that, as was previously hinted, Meltan is the first Mythical Pokemon with the ability to evolve.

On the updated page for the evolved creature, it is revealed that Melmetal hasn’t been seen in 3,000 years. Unlike the diminutive Meltan, it weighs nearly 1,800 pounds and stands over eight feet tall. Despite its size, its liquid metal body is incredibly flexible, which allows it to whip its arms forward to strike opponents.

“Melmetal possesses a unique Steel-type physical move called Double Iron Bash,” according to the updated page. “With this powerful move, Melmetal uses the hex nut in its chest like an axle to spin its powerful arms around, dealing a double strike to the opponent. The weight of the heavy hex nuts on its arms combined with this spinning motion give this move extraordinary power. After it hits, it may even make the target flinch!”

A screenshot of the creature evolving from Meltan into Melmetal in Pokemon Go shows that trainers will need 400 of the creature’s candies in order to evolve it. Anyone who has evolved a Magikarp or Swablu should be familiar with this requirement. Not only will you get Meltan candies from catching them, sending them to Willow, or having one as your buddy Pokemon, but you’ll also get candies when you transfer a Meltan from Pokemon Go to Pokemon: Let’s Go, Pikachu! and Let’s Go, Eevee! Using rare candies is always as option as well.

Unfortunately, we’ll have to wait a bit longer before we can obtain a Melmetal of our own, as Meltan will only become widely available again when the Pokemon: Let’s Go Switch games launch on November 16th.