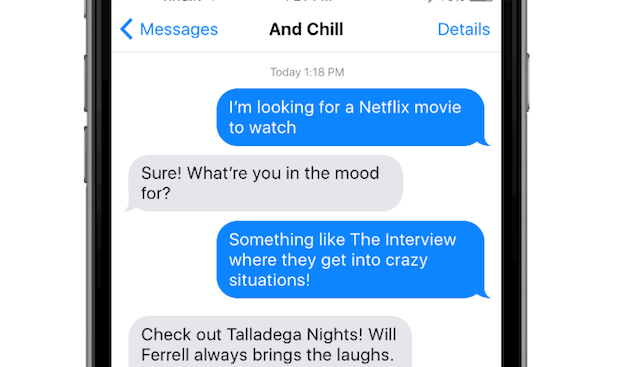 One of the most frustrating non-issues in all of our lives is trying to decide what to watch on Netflix. Even as the library continues to shrink, there are still thousands of movies and TV shows to sort through, with more original series, films, stand up acts and documentaries being added each and every month.

But what if there was a bot that could do the deciding for you?

MORE NETFLIX: Every movie and TV show being added in August

“And Chill” is the first chatbot that I’ve personally ever heard of that I actually wanted to use. Originally launched on May 10th, And Chill is a Facebook Messenger-based chatbot that offers movie suggestions based on the criteria you give it. So in theory, if you ask for “a British comedy with a bizarre twist ending,” there’s a good chance that the bot will suggest you watch Hot Fuzz.

The key to And Chill is its conversational tone and ability to understand what you’re asking for, even if you aren’t talking to it like it’s a bot. Unfortunately, And Chill has become so popular that it’s having trouble keeping up with all of its users, so you might have to wait a while before you get a response.

When I saw the Lifehacker article pointing to And Chill earlier today, I immediately rushed to Facebook to start a conversation. 20 minutes later, I’ve yet to receive a response, but the bot is definitely still a work in progress.

If you want to try And Chill yourself, head to the bot’s Facebook page and begin a conversation. You probably won’t get a response right away, but be patient.