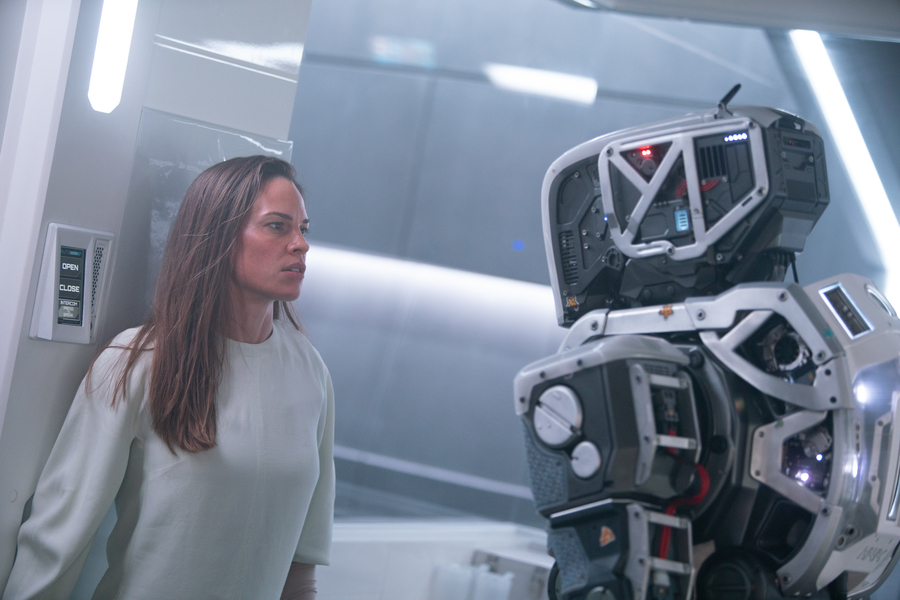 Oscar-winner Hilary Swank told me the other day about reading an article during a flight that she couldn’t put down. It got her thinking about a brave new world dominated by robotics and artificial intelligence — specifically, about the question of whether robots have rights, and of how we’ll treat them when they’re as ubiquitous as smartphones are today.

Like, if they begin to approach personhood — not a far-fetched notion at all, given how much humanity that tech giants are trying to instill in, for example, digital assistants — how far do we take this? Do robots deserve rights, to the same degree that we enjoy? And if they do, what then? How do you then proceed to turn them off at night? How do you unplug something like that? Should you?

Granted, all of those are mere academic questions (for now), but Hilary and her castmates make an attempt to tackle that subject matter in I Am Mother, the sci-fi thriller that hit Netflix Friday after debuting at Sundance this year (where the streamer promptly snatched it up). The movie also marks the feature film debut of director Grant Sputore, and has garnered generally positive reviews.

The basic plot: An overly protective robot known as “Mother” (voiced by Rose Byrne) raises a human teenager after an extinction-level event has supposedly wiped out human life outside of “mother” and daughter’s closed-off subterranean compound. Swank’s character eventually makes her way inside, throwing the teen’s whole world into question.

The teenage girl, played by Clara Rugaard, is the first of a new generation of humans to be raised by “Mother,” which is designed to repopulate the earth.

In an interview with BGR, Swank said that working with Sputore on the movie reminded her in a lot of ways of veteran director Christopher Nolan. It’s always a risk to take a chance on a first-time director, she noted, but Swank added that she appreciated Sputore’s particular understanding of everything from camera lenses and how to use them to elicit a particular emotion — in addition to how to tell a story through a camera in a way that belies his years in the business.

As far as why she wanted the role in I Am Mother? Swank told me she thought it was an interesting take on the at-times troubling interplay between humanity and technology.

“I think AI is going to become much more prevalent as we move into the future,” she said. “This is not going to be something that’s far off.

“As Grant says a lot, the interesting thing about AI is we don’t program them. They’re built, and then their experiences program themselves. So it’s not unlike a human being and how we experience the world. They just happen to be infinitely smarter than us and their learning curve is shorter. And their ability to move on to the next thing and learn from the mistake they just made is so great.”

One of the things Sputore insisted on for the movie is that CGI and computer-aided trickery be kept to a minimum, such that there’s actually someone inside the robot “Mother.” It’s an actor, who gives a human-like fluidity to the robot’s motions and behavior. Ninety-nine percent of the time, Sputore says, when you see the robot you’re seeing a guy in essentially a costume made by Weta Workshop.

As far as the story itself, Sputore said it’s a product of something he and the movie’s writer came up with themselves. “And it’s basically a concoction of all the stuff we find most fascinating in the world right now and in the movies that we grew up watching. As much as anything, it’s a love letter to the movies we grew up watching, whether it’s Predator, Terminator, Alien, RoboCop — all those films where most of what you’re seeing on screen was actually there on the day of.”

For newcomer Clara Rugaard, who plays the daughter in the movie, she too describes a feeling of compulsion, of the script basically grabbing her and not letting go. “I’d never read anything like this before,” she told me. “The daughter, she lives in a very unique situation, having grown up underground and been raised by a robot, and that’s all she’s ever known. Hearing how passionate (Sputore) was about this and hearing his vision for it, it was a no-brainer for me.”

Swank also finds some salience for the movie arriving at this particular moment in time, not least because of the strange current political climate. “The movie is unique, in that — in just kind of where we are in terms of ethics, morals, and values. Where we can’t have a healthy debate about much, it seems. And the idea of someone saying, enough of this. Let’s start over. It’s really frightening.

“It’s also wonderful for (your movie) to be acquired by a company like Netflix that has the ability to be seen by a lot of people. Ultimately, you want your story to be reached. I think one of the hard things about this business is telling a story, where you can have a brilliant story that never gets seen. Especially when you put so much into it.”