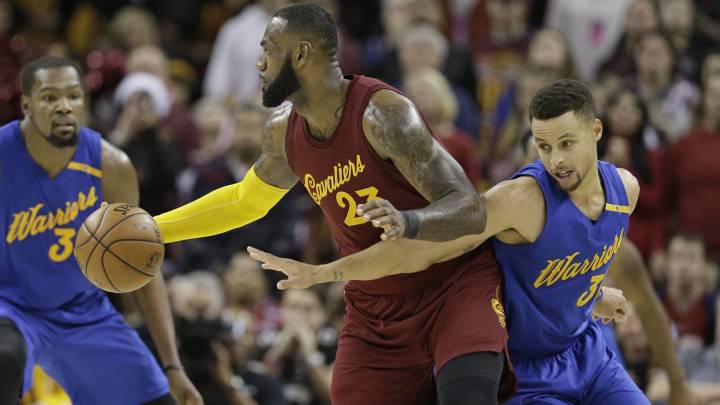 Last year, the Golden State Warriors blew a 3-1 lead to the Cleveland Cavaliers.

Since then, that’s all they’ve been hearing about. In fact, that’s all anyone’s been hearing about, as it has become the biggest sports meme since Crying Jordan. But starting tonight, in Game 1 of the NBA Finals, the Warriors have a chance to kill the meme, beat the Cavs and reclaim the title of NBA champion.

Game 1 tips off at 9:00 PM ET tonight on ABC, where the Warriors and the Cavaliers will enter with a combined one loss in the NBA playoffs. That one loss came in Game 3 of the Eastern Conference Finals, as the Celtics managed to eke out a close win against the Cavs after being embarrassed in Game 2. That is the only blemish for either team in the entire postseason going into the Finals this week. Golden State remains undefeated in the 2017 playoffs, putting them in elite company in NBA history.

Unsurprisingly, the Warriors are favored in the first game of the series. After winning the NBA Finals in 2015, winning an NBA record 73 games in the 2016 regular season and adding former MVP Kevin Durant to their roster in offseason, the Warriors are as terrifying this year as they’ve ever been.

On the other hand, LeBron James still plays for Cleveland. This is his seventh consecutive appearance in the NBA Finals, and his teams managed to win three of the previous six. One more puts him over .500.

If you want to watch this thrilling rematch, you have a few options. The first is to flip over to ABC on your TV at 9:00 PM ET, where all of the games will be broadcast. You can also watch all of the games live on the ESPN App, but you’ll need a cable login to access the stream.

If you don’t have a cable subscription, you can either buy an over-the-air antenna (which is how I’ll be watching in my living room), or you can sign up for a free trial of a variety of streaming TV services, such as DirecTV Now, Sling TV, Hulu Live TV or PlayStation Vue. Remember — even if you can access the ABC broadcast directly, you can use your login to get on the ESPN App.