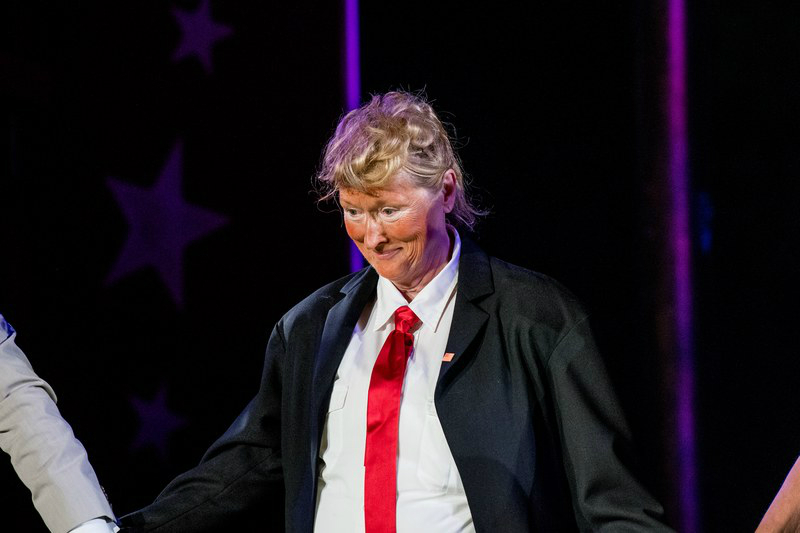 Whether you love the guy or you hate him, Donald Trump has certainly made an impression on people across the country and the world. Using unorthodox tactics, Trump managed to become the presumptive Republican nominee for this year’s presidential election. In the process, he annoyed many people with his vitriolic attacks while simultaneously raising immense support from other voters. At the same time, the things Trump says and does also happen to be a goldmine for comedians and other celebrities, who make fun of the billionaire every chance they get. Even Barack Obama got in on the action.

But Meryl Streep probably takes the cake when it comes to impersonating Trump – just look at the pictures below. She just set the bar for the best Donald Trump cosplay to date.

She’s got the perfect orange skin, the messy fake hair, and the proper suit and tie – and that tie is one of the best things about this whole Trump cosplay.

Streep took the stage at the Delacorte Theater in Central Park for the Public Theater’s annual gala, GQ reports. And she came on stage dressed to impress. Just like Trump.

Regardless of whether Trump wins or loses the nomination or the presidency, he should be humbled by the fact that Streep, of all people, chose to impersonate him in such a manner. Of course, if he does win and he manages to get his way, there’s always a chance the internet will be purged of these nasty photos, so enjoy them while you can.