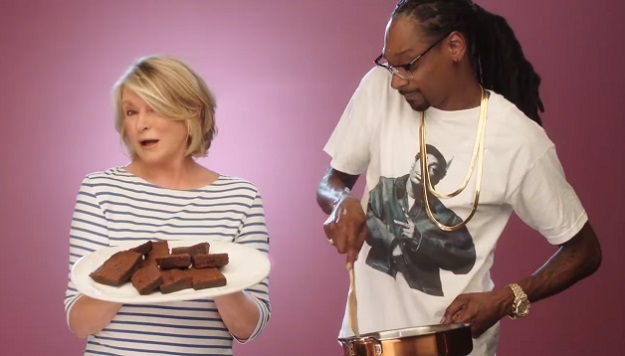 Snoop Dogg doesn’t typically get as much credit as Jay-Z or Puffy for being a consummate businessman, but make no mistake about it: the D O double G has been making savvy business moves for quite some time now. Over the past few years, Snoop steadily climbed up the Forbes list by partnering up with a wide array of successful businesses, including Skullcrushers, TomTom and even Chrysler. With respect to Chrysler, you might recall this famous commercial Snoop appeared in with Lee Ioacooca a few years back.

Additionally, Snoop has also proven to be quite adept in the entertainment world. To date, Snoop has appeared in quite a few movies and has been involved in a handful of reality TV shows. Keeping things rolling, Snoop’s latest venture might be his most intriguing yet — a reality show with Martha Stewart. The title — Martha & Snoop’s Potluck Dinner Party — couldn’t be more fitting.

The premise for the show is actually pretty interesting. Each episode will see the duo — who are apparently friends in real life — throw dinner parties for varying groups of celebrities. The first episode will reportedly feature the likes of 50 Cent, Robin Thicke, DJ Khaled and other notable guests.

The show airs on VH1 and will premiere on November 7. A fun little trailer for the show can be seen below.

Now will the show feature Snoop and co. indulging in some edibles a’la the presumptive pot brownies Stewart showcases in the video above? That’s anybody’s guess, but with Snoop in the mix, we can pretty much guarantee that the show will not be short on entertainment.