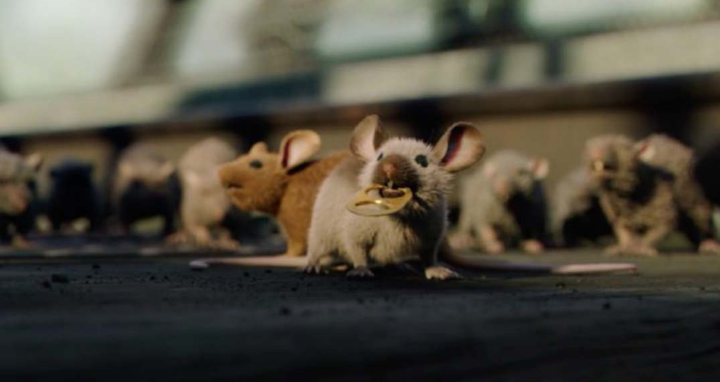 The folks at Amazon aren’t the only ones getting into the Lord of the Rings remake game.

A group of students from the ISART Digital school in Paris have put together a roughly four-and-a-half-minute-long animated remake of the epic Tolkien tale. Featuring a cast of adorable CGI mice that are very, well, precious.

From a description via Comicbook.com, “In a dark subway tunnel, a group of mice find a gold ring-pull that seems to have a mysterious effect on one of them. Not so far from them, an owl and his enslaved rats are watching. The owl sends his rats to get hold of this strange object…

“The story is updated for modern times, with a subway as its setting and a soda can pull instead of the traditional ring — but there are still plenty of callbacks to the original Lord of the Rings movies … and, hey. Even if it’s only for a few minutes, this managed to be more entertaining than the whole of The Hobbit‘s three movies.”

Besides the mice, the Ringwraith characters are rats, while Sauron is represented by an owl. So there you go, just a lighthearted clip to give you all a bit of mid-week fun.

Amazon, of course, is pressing forward with its much more serious artistic endeavor in the form of a planned Lord of the Rings series. A gamble that’s already representing a financial commitment from the tech giant of hundreds of millions of dollars.

In a recent interview with The Hollywood Reporter, Amazon executive Jennifer Salke said about the upcoming series that the plan is to go to production in the next few years in time to get it on Amazon’s streaming platform in 2021. Details are still slim on the content and story, which reportedly may have some focus on the character of a young Aragorn.

Amazon is also reportedly talking to director Peter Jackson about having some kind of involvement.

Tags: Lord of the Rings