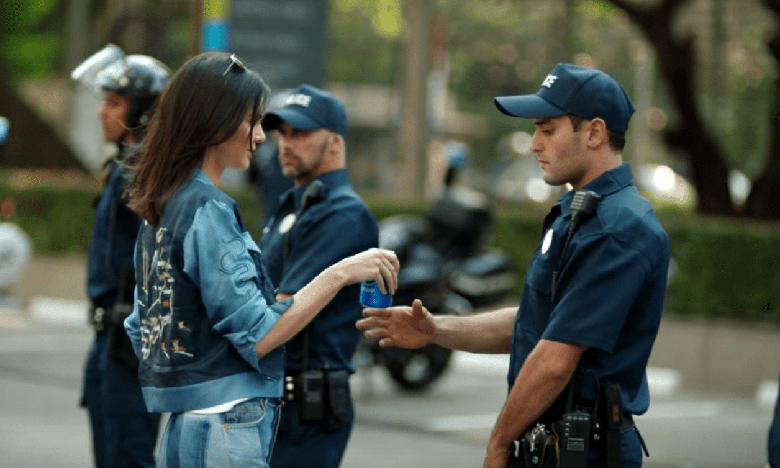 Last week, a new Pepsi ad featuring Kendall Jenner attracted an onslaught of media attention for all the wrong reasons. In a nutshell, the ad features Kendall Jenner storming out of a photo shoot and joining up with a seemingly generic protest on the street. With a clear divide between the protesters and the police, Jenner storms through the crowd, swiftly picks up a Pepsi can and hands it to a stern looking officer who can’t help but smile with 12 ounces of carbonated liquid gold in his hand. And as the sweet, crisp sound of the can being opened bellows through the crowd, the protesters begin cheering wildly.

The ad immediately struck many as tone-deaf, with some taking the position that it misappropriated the Black Lives Matter movement. Predictably, the ad was mercilessly mocked on Twitter and even spawned a number of short-lived memes in the process.

Over the weekend, Saturday Night Live tackled the commercial with a well-crafted and hilarious behind-the-scenes look at what may have been going through the director’s mind in the minutes preceding the shoot.

The ad more or less begins with the nameless director of the ad — played masterfully by Beck Bennet — talking with his sister about why he’s so excited about shooting his first big-time commercial.

“So it’s an homage to the resistance,” Bennet’s character says enthusiastically. “So there’s this huge protest in the street, reminiscent of Black Lives Matter, and so everyone’s marching and they get to these police officers and you think it’s going to go bad because there’s kind of like a stand-off; and then, Kendall Jenner walks in and she walks up to one of the police officers and she hands him a Pepsi. And that Pepsi brings everyone together. Isn’t that like the best ad ever?”

Immediately afterwards, Bennet hangs his head in disappointment after his sister calls it tone-deaf. Further seeking even a crumb of affirmation, Bennet proceeds to have phone conversations with a few other folks who advise him that the ad many not be as brilliant and progressive as he initially imagined.

The ad concludes with Kendall Jenner — played by Cecily Strong — talking to one of her friends about the subject matter of the commercial: “I stop the police from shooting black people by handing them a Pepsi. I know! It’s cute, right?!”

For what it’s worth, Pepsi ended up pulling the original ad less than 24 hours after its debut. Of course, it hasn’t been erased from the web, with some people even theorizing that Pepsi released the ad with the express intent of generating controversy. The original ad can be viewed below.