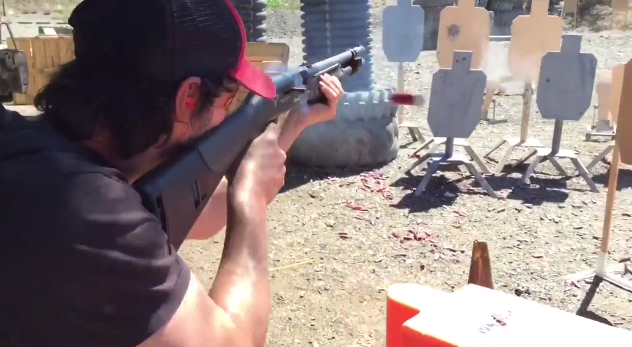 In less than a day, a video showing Keanu Reeves training with firearms – or “shredding” – got over 4 million views combined on YouTube and Facebook. The actor has been training at Taran Tactical for his upcoming movie, John Wick: Chapter Two, set to hit theaters next February.

The video shows Reeves’s impressive firearms maneuvering skills. The video is just 38 seconds long and shows a couple of shooting sequences. In the first 20 seconds, we see Keanu switch from rifle to a handgun to shotgun in a matter of seconds, “shredding” his targets. Then, a very short slow-motion segment shows him firing the shotgun and hitting the target. Then the action resumes with Reeves moving forward with similar speed.

One of the things John Wick stood out for was the complex shooting scenes that involved not only firing guns in close quarters but also performing hand-to-hand combat during firefights and combining them for massive destruction. If you’ve seen the movie, then you’ll immediately remember the club scene, which we’ve embedded at the end of the post for reference. If you haven’t, then you simply have to find time to watch it before the sequel arrives.

“Well ladies and gents, everyone loves a little shredding,” Taran Tactical Innovations wrote on Facebook. “Make sure you guys check out ‘John Wick II‘ when it hits theaters. The firearms action alone will be unlike anything you’ve ever seen. So much of it is revolutionary stuff that we gun owners have known of for years but never made it to the big screen.”

As expected, commenters on Facebook and YouTube applauded Reeves performance. And how could they not. After all, he’s both John Wick and The One.

Here’s Keanu’s “shredding” clip, followed by the club scene from the first movie.