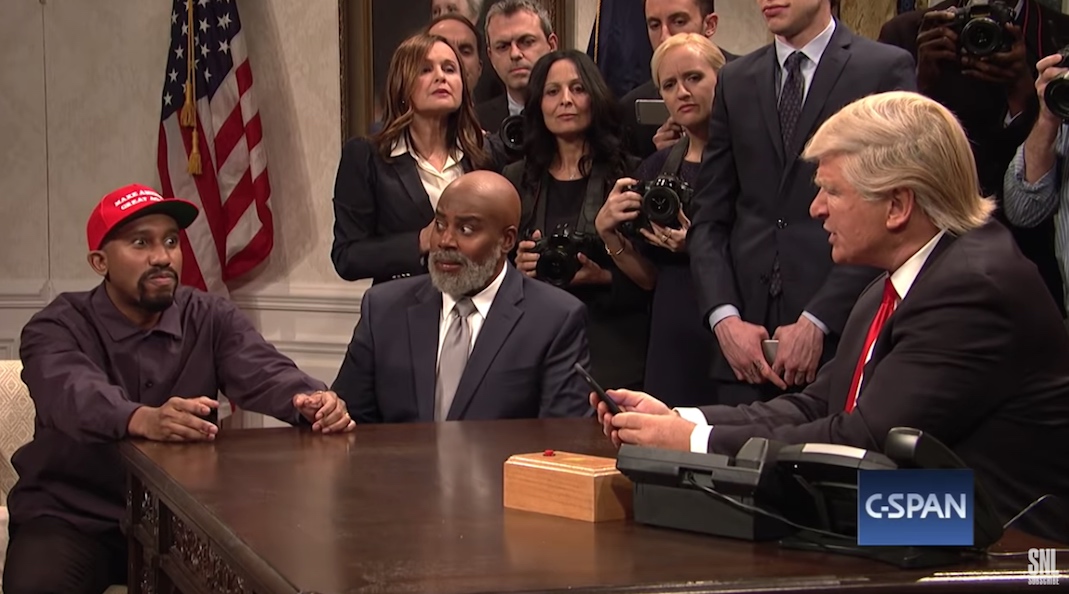 Just when you thought the political climate couldn’t get any more surreal, Kanye West last week had a bizarre and high-level meeting with Donald Trump in the Oval Office, all before the ogling eyes of dozens of reporters and photographers. Sporting a “Make America Great Again” hat, West talked to Trump for upwards of 20 minutes on a variety of topics, some serious and some downright out of left field.

All that said, Saturday Night Live over the weekend spoofed West and Trump’s meeting during the show’s cold open. Truth be told, it’s hard to create a hilarious sketch when the topic of parody itself is already inherently funny. Still, the writers at SNL did a pretty solid job of poking fun at an encounter that emphatically proves that truth is always stranger than fiction. With Chris Redd playing the role of Kanye and Alec Baldwin doing his patented Trump impression, SNL’s cold open this weekend was, as Larry David might say, pretty, pretty good.

The video kicks off with Kanye talking about flying to the White House using the power of his MAGA hat, but the sketch really gets rolling once West starts going off on all sorts of bizarre tangents.

“First, let me begin with the idea that time is a myth, and there’s an infinite amount of universe. And I’m a prisoner in a different dimension, have I lost anyone so far? Okay, so I’m gonna talk about trap-doors. Like the 13th amendment is a trap door, and if you’re installing a constitution, why would you build a trap-door when you can end up with the Unabomber?”

In response, we hear a bit of Trump’s inner monologue and it all plays out to hilarious effect. Suffice it to say, this is one of the better cold opens SNL has had in a few weeks time. You can check out the full video below.