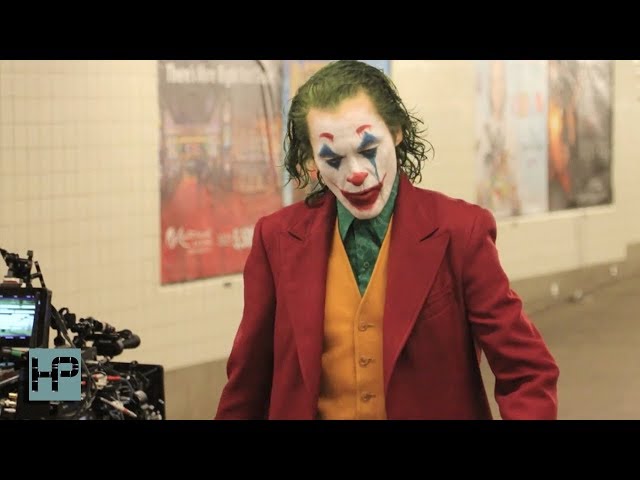 People are making the same joke, pardon the pun, about new set footage that’s leaked from the in-production Joker film starring Joaquin Phoenix. In the new footage, Joaquin can be seen fully decked out as the makeup-wearing Clown Prince of Crime. He cooly lights a smoke and swaggers, like Batman’s epic nemesis that he is, down a subway corridor while cops run the opposite direction.

You can see where this is going. In posts about the footage, as well as in the comments on YouTube, it brings, shall we say, a certain Steve Miller song to mind. The one about a joker, smoker and midnight toker.

At any rate, the folks over at Syfy Wire certainly think the footage makes Joaquin look cool and threatening as “Batman’s greatest foe.”

“What’s interesting about Phoenix’s look,” the site continues, “… is that the suit seems like a blend of Cesar Romero’s when he played the role in the 1960s series and Heath Ledger’s when he took on the role in 2008’s The Dark Knight. (The makeup? Very Ledger-esque.)

“We still don’t know much about the story of this standalone film directed by The Hangover’s Todd Phillips, other than that it takes place in the ‘90s and Phoenix’s version of the character isn’t an unknown (like he typically is in most interpretations, minus perhaps the 1989 Tim Burton film), but instead is a comedian/clown named Arthur who has One Bad Day that pushes him over the edge.”

The cast includes other names like Robert De Niro, Marc Maron, Zazie Beetz, and Brett Cullen. The subway footage comes via HollywoodPipeline, and Comicbook.com has a bit more about the backstory:

“Notes from paparazzi on the scene state that Phoenix’s clown is scene running into the station in a clown mask to meet a mob of people in clown masks, holding up signs that read things like ‘Kill the Rich,’ ‘Blame Wayne,’ and ‘Clown4Mayor.’ We only have speculation to go on, but photos of (Joker/Arthur Fleck) reveling in the chaos as the mob of clowns pins down a well-dressed man, seemingly point to this sequence being one of The Joker’s first real attempts at anarchistic behavior, stoking a protest into an outright mob eruption, with the city’s poor and hard-working class rising up against the wealthy elite.”